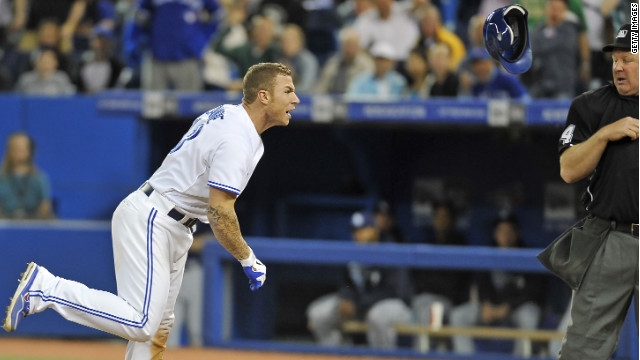 Brett Lawrie of the Toronto Blue Jays throws his batting helmet to protest a third strike call by umpire Bill Miller on Tuesday.
May 17th, 2012
06:49 AM ET

Major League Baseball has suspended Toronto Blue Jays third baseman Brett Lawrie for four games for an outburst Tuesday in which he threw his batting helmet, which bounced off the ground and struck umpire Bill Miller.

In the ninth inning of Tuesday's game in Toronto against the Tampa Bay Rays, Lawrie faced Rays closer Fernando Rodney. With a count of three balls and one strike Lawrie took back-to-back pitches from Rodney. Miller called both strikes, sending Lawrie back to the dugout.

Trouble was, when the third strike was called, Lawrie had already taken two steps toward first base, thinking he had drawn a walk. He spun around, took two steps back in the direction of the umpire and threw his batting helmet to the ground. It bounced up and struck Miller.

Besides the four games, Lawrie was also fined an undisclosed amount, according to a report on MLB.com.

He pledged to appeal the ruling and can remain in the Blue Jays lineup during the appeal process.

"I feel that I have the right to explain my side of the story about what happened last night. I just have to suck it up, appeal it and worry about baseball, worry about playing today and getting a win," he said before Wednesday's game against the New York Yankees, according to MLB.com.

Lawrie said it was not his intention to strike Miller with the helmet, but the helmet took "a bad hop," according to a report in the Toronto Star.

ŌĆ£A lot of people are saying I threw it on purpose, but I didnŌĆÖt. It was a very frustrating moment in the heat of the game. . . . bad luck,ŌĆØ the Star quotes Lawrie as saying.

Lawrie went to see Miller before Wednesday night's game to apologize, according to the Star report.

He also said the incident would not change his approach to the game.

"You just play the game the way IŌĆÖve always played it. I donŌĆÖt feel I have to change it and the only thing IŌĆÖd change is throwing (the helmet) near him, because you can get a bad hop,ŌĆØ the Star quoted him as saying.

There are at least 432,438 cases of coronavirus in the US and at least 14,808 people have died during the outbreak,ŌĆtwitter.com/i/web/status/1ŌĆ”N4
cnni