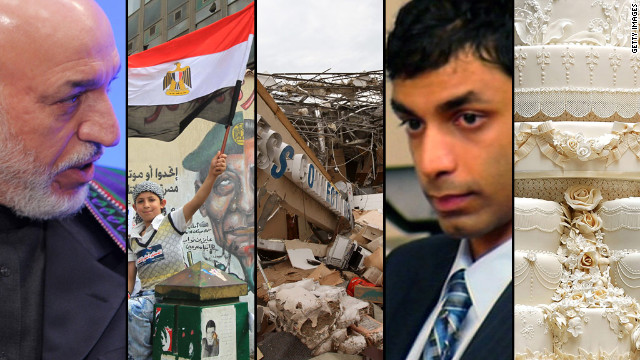 At NATO summit: How will Afghanistan pay for its troops?

NATO countries on Monday will be trying to figure out how to meet a planned 2014 withdrawal from Afghanistan while shoring up Afghanistan's security forces.

Leaders of NATO countries, plus officials from Afghanistan and Pakistan, will continue meeting in Chicago for a summit that began over the weekend. Â One of the key issues: Â Who will pay for the buildup of Afghan forces as NATO draws down its troops?Â Afghan President Hamid Karzai, who is attending the summit, is believed to be able to afford only a fraction of the cost that CNN National Security Analyst Peter Bergen says willÂ total roughly $4 billion annually by 2014.

A user's guide to the Chicago NATO summit

A former Rutgers University student convicted of spying on and intimidating his gay roommate could get a maximum 10-year prison term when he is sentenced Monday.

Dharun Ravi was convicted of chargesÂ including invasion of privacy and bias intimidation.Â His roommate, Tyler Clementi, an 18-year-old freshman, killed himself in September 2010 by jumping off the George Washington Bridge and into the Hudson River after learning that Ravi had secretly spied on his sexual encounter with another man using a webcam and then sharing the footage.

After the conviction, RaviÂ told ABC's "20/20"Â that prosecutors got the incident wrong and that he "wasn't trying to intimidate (Clementi) and scare him because he was gay."

The U.S. Army's Fort Hood on Monday intends to give Vietnam War veterans "the same fanfare present-day soldiers receive when they return from Iraq and Afghanistan."

The Army is inviting Vietnam veterans to the Texas military installation for a "welcome home" ceremony, 37 years after the war ended, Fort Hood says. The Army saysÂ veterans will parade in front of hundreds of supporters.

Iran and a group of world powers including the United States are expected to meet in Iraq on Wednesday to discuss Iran's nuclear program, a source of great tension because of Western suspicions that the program aims toÂ develop nuclear weapons.

Iranian officials are to meet with delegates from the "P5+1," which is the five permanent U.N. Security Council nations - the United States, the United Kingdom, China, Russia and France - plus Germany.Â Western nations have slapped crippling sanctions on Iran in hopes of reversing what they say is Iran's pursuit of nuclear weapons.Â Iran denies the allegations and insists that its nuclear program is intended solely for civilian energy purposes.

In remarks denounced by an Iranian lawmaker, Israeli Prime Minister Benjamin Netanyahu said Friday that Iran would not take nuclear talks seriously and alleged that Iran will use the talks "as another opportunity to deceive and delay just like North Korea did for years."

A monster tornado ripped through Joplin, Missouri, one year ago Tuesday, killing 161 people, injuring hundreds more and destroying miles of businesses, homes and schools. On Monday, President Barack Obama will be part of the city's remembrance of the day, speaking at the commencement of Joplin High School seniors.

On Tuesday, Joplin will hold a Walk of Unity - people will be walking along the tornado's path - and groundbreaking ceremonies for three new schools.

A year after the storm, hundreds of families are still living in FEMA trailers and are unable to rebuild their homes. Although Joplin has worked fast to rebuild, many of the hundreds of businesses destroyed by the tornado have not been able to get back to full speed.

Ways that people can assist Joplin

Egypt on Wednesday and Thursday will hold its first presidential elections since then-President Hosni Mubarak was ousted last year.

The nation has been under military leadership since the uprising. Protests erupted in Cairo earlier this month amid a backdrop of frustration about the pace of reform, with some people concerned that the military leadership was delaying the transition to civilian rule. More than a dozen people were killed in clashes between protesters and security forces in Cairo's central Abbasiya district.

Twelve candidates are running in the presidential election, including moderate Abdelmonen Abol Fotoh and former Arab League chief Amre Moussa, who faced off this month in a debate thatÂ kept millions nationwide glued to their TV screens for more than three hours. Results could be known by Friday, and a run-off, if needed, would happen June 16-17.

Your chance to get Prince William's wedding cake, Reagan's blood

Two curious auctions are set to end on Thursday.

A guest at last year's wedding of Prince William and Catherine Middleton apparently kept a piece of the wedding cake and is selling it. The slice, presented in a tin and accompanied by the 16-page program of the wedding service, is up for bids at pfcauctions.com. At one point on Sunday afternoon, the bid was atÂ ÂŁ1,453 (about $2,300).

Also Thursday, a vial that was said to hold a sample of U.S. President Ronald Reagan's blood after his 1981 assassination attempt will be sold. The vial is said to contain dried blood residue. On Sunday afternoon, bidding for the vial was above ÂŁ3,200 (more than $5,000).