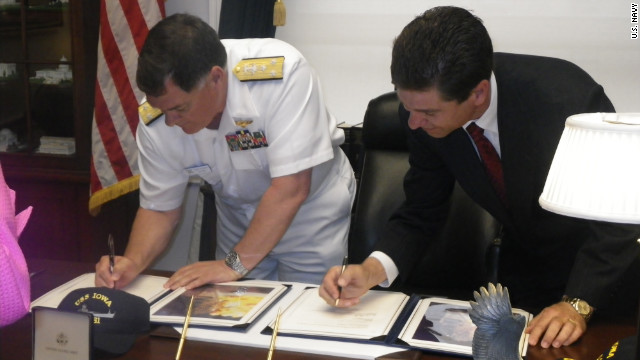 The Navy's Vice Adm. Mark Skinner, left, and Robert Kent of the Pacific Battleship Center sign the donation transfer contract for the USS Iowa during a ceremony on Capitol Hill in April.
May 20th, 2012
01:23 PM ET

[Updated 1:23 p.m. ET] A weather system affecting the West Coast has delayed plans to tow the battleship Iowa from the San Francisco Bay to the Port of Los Angeles, the tow boat operator said in a statement on Sunday.

Crowley Maritime Corp. said all activities related to the movement of the Iowa will be rescheduled once the weather system passes later in the week.

[Posted 12:50 p.m. ET] The battleship Iowa begins what its expected to be its final voyage on Sunday, being towed from Richmond, California, south to San Pedro, where it will open as a museum this summer.

The ship, launched in 1942 and decommissioned in 1990, has been part of the mothballed fleet anchored in Northern California's Suisin Bay since 2001, according to a report in the Contra Costa Times. Efforts to turn it into a museum in the Bay Area were unsuccessful over the years, and it was acquired by the nonprofit Pacific Battleship Center for use as a museum in San Pedro, near Los Angeles.

‚ÄúThis is the final journey for the USS Iowa on open water,‚Äù Robert Kent, president of the Pacific Battleship Center, said in a statement on the organization's website. ‚ÄúUpon arrival at Los Angeles Harbor, the USS Iowa will be just days away from opening as an interactive museum experience that honors and illustrates the contributions of this battleship and its Navy and Marine crew at critical moments in American history.‚Äù

A webcan has been mounted on an antenna above the ship's bow and video of the voyage will be streamed live. You can watch here.

The Iowa's journey down the California coast will take four days. Its public opening in San Pedro is set for July 7.

The Iowa is known as the "Battleship of Presidents" as it has hosted more commanders-in-chief than any other of its kind. It has a bathtub installed especially for President Franklin Delano Roosevelt in 1943.

The Iowa has three sister ships: the Missouri, which is a museum in Pearl Harbor, Hawaii; the Wisconsin, a museum in Hampton Roads, Virginia; and the New Jersey, a museum on the Delaware River in New Jersey.