Derick Almena, the leaseholder of an Oakland, California, warehouse-turned-art collective that went up in flames inŌĆtwitter.com/i/web/status/1ŌĆ”5j

NBC Sports Network is shutting down at the end of this year, the company said. The cable network will cease operatiŌĆtwitter.com/i/web/status/1ŌĆ”iR

The CNN Daily Mash-up is a roundup of some of the most interesting, surprising, curious, poignant or significant items to appear on CNN.com in the past 24 hours. We'll top it with a collection of the day's most striking photographs.

Sunday's heartrending story about Aesha, a young Afghan woman who was mutilated by her family for seeking her freedom, drew hundreds of comments from CNN readers. Here is one that sums up many people's reactions:

Jessica Ravitz wrote the article so well that the difficulty in trying to help Aesha is palpable. I became frustrated just reading the article with her behavior, but also couldn't stop reading. Admittedly, my reaction was to think of her as a "spoiled little brat" and that she needed to "act her age". But when I see Jamila's words about how she never had a real childhood, when I think about being given away at 12 to pay for someone else crimes, and when I look at the pictures of the brutality, I understand that her psyche and the torment she has endured is something that I will never comprehend.

It's hard because this is not a success story. But I think this article keeps the ugly face on what is happening to women over there. A success story makes you feel good and this one does not; there are women who will be abused and struggle their entire lives with no happy ending. It's important to bear that in mind.

A year later, Joplin on the mend

A year after an F5 tornado devastated her city and killed 161 people, Judy Lowe finds reasons to be hopeful:

I'm proud of Joplin. We have a long way to go. Seeing it every day you just want it over, want it done, want it fixed. Unfortunately we're not there yet, but we will be. 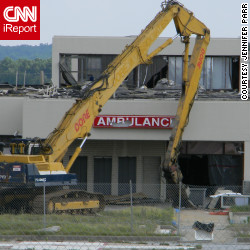 The heavily damaged St. John's Hospital in Joplin, Missouri, is being rebuilt.

Jennifer Parr, a CNN iReporter in Joplin, Missouri, used a series of photographic iReports to document the recovery process along the path of the tornado. While terrible scars remain, signs of progress are everywhere.

President Barack Obama will deliver the commencement address Monday night for graduates at Joplin High School, which has met in a shopping mall since the storm destroyed the school.

New Jersey Superior Judge Glenn Berman on Monday sentenced Dharun Ravi to 30 days in jail for spying on and intimidating his gay Rutgers University roommate, Tyler Clementi. Clementi killed himself in September 2010 after Ravi surreptitiously recorded him in a sexual encounter with another man. Berman told Ravi:

I haven't heard you apologize once. (Clementi) placed his trust in you without any conditions, and you violated it.

Ravi could have faced 10 years in prison and deportation to his native India, but the other man involved in the encounter, identified in court only as "M.B.," said in his victim impact statement he did not believe Ravi should be deported. In his statement, M.B. said:

I do not mind that Mr. Ravi has never apologized to me for what he did and said, but I do wonder if it ever has entered his mind that he has caused me a great deal of pain and yet he knows nothing about me.

What you gonna do when they come for you?

It was not just another Saturday night's work for police in Seattle. Officers had their hands full Saturday as they tried to control a bar patron who took off her clothes, covered her upper body in hot pink duct tape, and fought off all comers. Apparently back flips and kicks to the officers' heads were involved as well. CNN affiliate KCPQ has all the details.

A tractor-trailer carrying thousands of bottles of beer overturned on Interstate 95 in Volusia County, Florida, early Monday, spilling the brew and forcing authorities to close the road, CNN affiliate WKMG in Orlando reports. Watch out for drunken alligators.

This little piggy never made it to market

CNN affiliate KCRG tells the story of Olivia, a piglet who was badly hurt when she fell off a truck in Iowa but who fell into a new future away from the breakfast table.

The private space company SpaceX will make a second attempt to send the first private spacecraft to the International Space Station, after Saturday's launch was aborted at the last possible second. Launch from NASA's Kennedy Space Center is now scheduled for 3:44 a.m. Tuesday.

Former Secretary of State Colin Powell's eagerly awaited memoir will be released Tuesday. Friends and foes of the George W. Bush administration are hoping the book, titled┬Ā"It Worked For Me: In Life and Leadership," will shed light on the decision to go to war in Iraq in 2003.

ŌĆ£Even though the family [took] Boncuk back home she managed to escape every day to wait at the hospital gate,ŌĆØ a twitter.com/i/web/status/1ŌĆ”WdbXjD
cnni

11:13 pm ET January 22, 2021 RETWEET
Ford is recalling 3 million US and Canadian vehicles with airbags manufactured by the same company whose devices haŌĆtwitter.com/i/web/status/1ŌĆ”sL
cnni