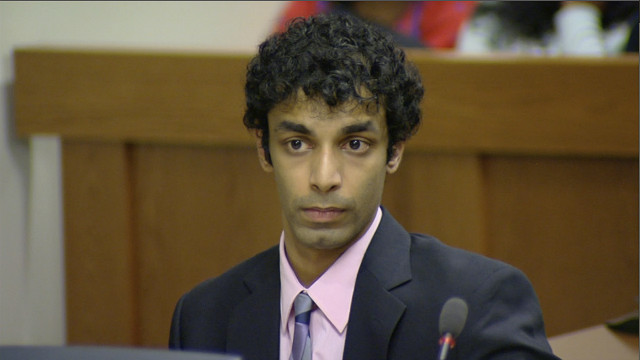 Is 30-day sentence fair for student who bullied gay roommate?

Former Rutgers University student Dharun Ravi was sentenced Monday to 30 days in jail for spying on his gay roommate, Tyler Clementi, who committed suicide in September 2010.

Ravi will also serve three years of probation, complete community service and pay more than $11,000 in restitution for the conviction. But after potentially facing deportation and 10 years of jail time for using a webcam to spy on Clementi, who jumped off the George Washington Bridge in the Hudson River, the world is taking to the web with their opinions on the sentence.

A miscarriage of justice?

Faiza S Khan ‏@BhopalHouse If the law means vile Dharun Ravi gets 30 days for bullying his roommate to point of suicide, surely something wrong with the law?

Ms. Tee ♓ (Bawse) ‏@TheTeester Dharun Ravi only gets 30 days. I'm sorry but this is making a mockery of the justice system #RutgersTrial

Ethel Mertz ‏@boyalexboy Best community service is having Dharun Ravi go out and speak at high schools as a warning to bullies to mind their own business.

John Kultgen‏ @getitsally I believe in learning from even the worst mistakes. I don't have any "should" belief of what should happen to Dharun Ravi.

Bryan Jones: He is a kid that did what hundreds of thousands of kids do everyday... something stupid. The judge did a great job. Don't make it into something it isn't.

Anthony Negron: I think you don't know what you are talking about. If an U.S. citizen did this overseas, they would of made the U.S. kid an example in that country

Heather Anne: Yes, but that there not here and it not what we're about.

eyeofsauron: That's it? He went out of his way to spy on what people did behind closed doors. He builds his joy on someone else's pain, and he has a fundamental character problem. He should have been locked away and pay for a good part of his life. It would be unfair for him to have a life after what he has done while the other family ended up with a dead kid.

TheTurth: That was his room. The other guy went behind to have some gay fun in their shared room.

CapnHowdyxkl: Once again the homosexual haters are out in force, but in the end you have to ask yourselves , what if this were your son? Would you feel this is justice. Same as the Trayvon case, put yourself in the shoes of those people who lost the light of their lives, would you feel the same?