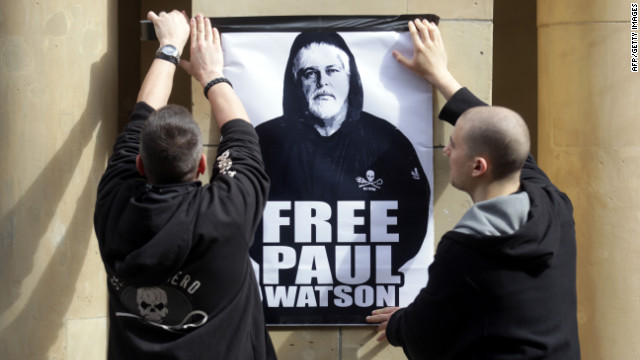 Watson, whose attempts to disrupt Japanese whalers at sea gained fame through Animal Planetâ€™s â€śWhale Warsâ€ť TV show, was detained last weekend at the Frankfurt airport after Costa Rica issued an international request for his arrest.

Costa Rican authorities allege that Watsonâ€™s crew aboard Sea Shepherdâ€™s Ocean Warrior ship endangered a Costa Rican fishing vessel during a confrontation off Guatemalaâ€™s coast in 2002, according to the Frankfurt court.

The U.S.-based Sea Shepherd has denied wrongdoing in the Costa Rica case and urged supporters through its website and social media to write to German officials, arguing that the charges have less to do with law than with Watsonâ€™s anti-conservationist enemies and that it doubts he would get a fair trial.

â€śAs Sea Shepherd becomes increasingly more effective at protecting marine wildlife globally, the enemies of the oceans are using all of their resources to stop us,â€ť the group said in a statement. The extradition request "we believe stems from Sea Shepherd victories in curbing shark finning on the high seas.â€ť

The Ocean Warrior used water cannons on the fishing vessel in an effort to stop it, but â€śthere were no injuries and no physical damage to any ship,â€ť Hammarstedt said.

The confrontation is detailed in part of a 2007 documentary, â€śSharkwater,â€ť Hammarstedt said.

5:11 pm ET December 4, 2021 RETWEET
Crumbley Parents pleaded not guilty. Their attorney said the gun used in shooting was locked up at the home. Theirâ€twitter.com/i/web/status/1â€¦AD
sarasidnerCNN

11:17 pm ET December 3, 2021 RETWEET
@EpettingJ @KateBolduan @oaklandpoliceca The crimes themselves are sensational. Multiple smash and grabs all over aâ€twitter.com/i/web/status/1â€¦b9
sarasidnerCNN