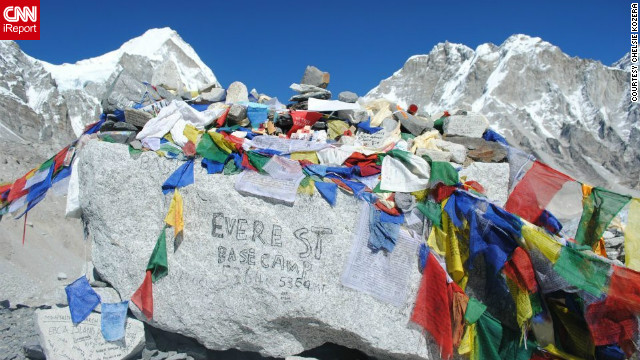 What is being called a "deadly traffic jam" of climbers ascending Mount Everest might be a factor in the death of four people descending the world's tallest mountain.

The news came amidst the celebration of a landmark climb for Tamae Watanabe of Japan, who, at 73 years old, became the oldest woman to climb Mount Everest on Saturday morning. She broke her own 10-year-old record.

Bad weather has also been blamed. Sandra Leduc, a Canadian woman who is climbing Mount Everest, has been tweeting about the storms. She saw lightning in the distance and tweeted that the peak winds were roaring at 100 kph.

She also tweeted that two or three hours from the summit, her sherpa wanted the team to descend immediately, because it was the worst weather he had ever seen. The very low temperatures appear to have affected a regulator she was using, which also has an effect on her oxygen supply.

What is altitude sickness?

But her most chilling tweet referred to those who did not survive their trek.

Michael Harley also made an observation that many are considering, perhaps for the first time.

Six people have died on Mount Everest this year, but it's not the disaster faced by climbers in 1996, the deadliest year to date for the mountain, with 16 deaths. On May 10, 1996, 10 teams were stranded by a storm and white-out conditions, with temperatures reaching 40 degrees below zero.

Adventurer Bear Grylls, who was one of the youngest climbers to reach the summit of Mount Everest, shared his perspective on the tragedy.

Readers had much to say about the dangers of the climb versus the rewards. We received more than 1,500 comments on CNN.com.

daddy2010: "At least they died doing what they enjoy. Better than dying in a cubicle on Friday and having no one find the body till Monday."

darcechoke: "This is why I don't climb Mt. Everest. Well, this and the fact that I get winded climbing a flight of stairs."

Isocyanide: "Everest is the Disneyland of mountain climbing. Standing in line for hours and hours for the ride a million other people have taken."

Some talked not only about the dangers but about the bodies, the expenses involved and the waste left behind. The following commenter suggested a deposit to cover recovery expenses.

Unit34AHunt: "Everest has in excess of 200 known corpsicles, and massive heaps of discarded trash. Seems properly respectful of this earth to clear out all that detritus rather than allowing it to accumulate.Â 'They died doing what they love?' Tell it to the corpses of the ones who begged not to be left behind as they froze to death."

djfl00d: "Going up after dead bodies or trash means you bring less with you, which means you won't be carrying what you need to survive, and there's another dead body to go after."

For many, the sherpas who accompany climbers on some treks are indispensable.

MrsColumbo: "I hiked to Everest Base Camp in 95. The Sherpa's are unbelievable. They leave after you with your heavy pack, run by you get there ahead of you and have camp set up. It is not them who get paid the big bucks to take you to the top, it is the companies that sponsor them. You will not meet a nicer group of people than the Nepalese Sherpas."

Others were quite saddened by the news.

smc77: "I feel for these people and their families. I hike mountains, nowhere near this challenging, and have turned back when I thought the risk was too great. I can only imagine the draw to complete this goal, the costs (planning, physical, financial) involved, and the disappointment one must ponder when making the go / turn-back decision. I hope that all can take solace in knowing they died doing something they enjoyed and was important in their lives."

Would you climb Mt. Everest? What do these attempts say about humanity? Comment below and tell us what you think.

You can also sound off on video via CNN iReport.