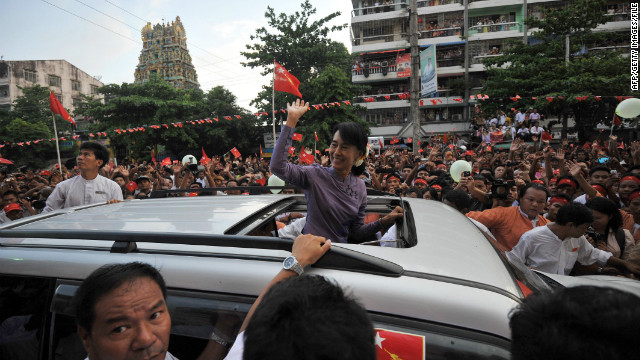 Myanmar opposition leader Aung San Suu Kyi at the opening of a National League for Democracy office in Yangon Monday
May 24th, 2012
01:24 AM ET

Myanmar opposition leader Aung San Suu Kyi will make her first trip outside the country in more than two decades when she visits Thailand next week to attend a regional conference, a spokesman for her party said Thursday.

Suu Kyi, a pro-democracy campaigner who endured years of house arrest under Myanmar's military rulers, will travel to the Thai capital of Bangkok on Monday where she will participate in the World Economic Forum on East Asia, said Nyan Win, a spokesman for the National League for Democracy.

The visit to Bangkok comes ahead of a longer trip to Europe next month during which Suu Kyi will make a series of key addresses, including the acceptance speech for the Nobel Peace Prize that she was prevented from collecting in 1991 because she was in detention.

3:00 pm ET September 25, 2021 RETWEET
Germany's vast forest are more than the country's green lungs -- they are part of its cultural heart. But with waâ€twitter.com/i/web/status/1â€¦ml
CNNweather