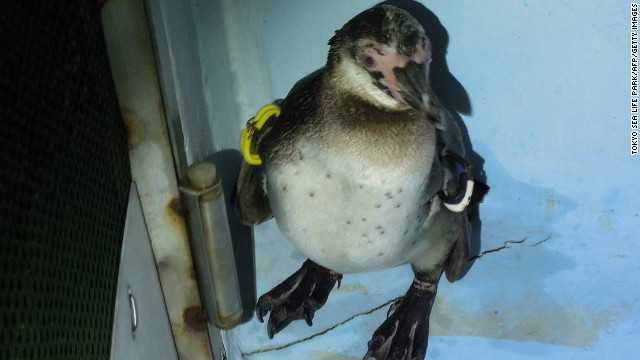 When a 1-year-old Humboldt penguin that escaped from a Tokyo aquarium three months ago dared to set foot on land in Ichikawa on Thursday night, it was captured by hand and finally collared, The Japan Times reported.

An aquarium employee was walking alongside the Edogawa River in Chiba Prefecture at 5:30 p.m. and spotted the fugitive penguin, which escaped in March.

The penguin was seen swimming in the river near the Kanamachi water purification plant in Katsushika Ward earlier in the week. Last week, people also saw it thriving and snacking on small fish in Tokyo Bay. It was assumed that the bird was finding some place to rest onshore at night.

The fugitive bird, known as Penguin 337, somehow scaled a 13-foot wall and got through a barbed-wire fence to get into the bay. Aquarium officials believe it escaped through small gaps that cats and frogs can pass through.

Officials from Tokyo Sea Life Park feared the penguin would not survive in the waters of the bay, busy with marine traffic headed for densely populated Tokyo.

The penguin was filmed by a Japanese coast guard patrol craft on May 7, but the crew was unable to catch it then.