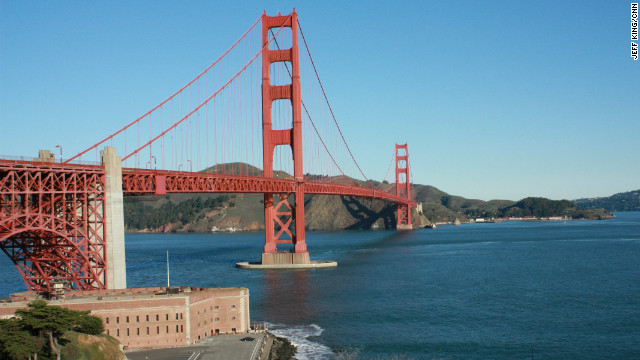 Sunday is just a little sunnier in the San Francisco Bay today.

It is the 75th anniversary of the Golden Gate Bridge, and to honor the iconic structure, project Solar Beacon was unleashed. Solar Beacon is an art installation that sits atop the bridge's towers and shines two lights "that are bright as the sun, but much smaller in size," across the Bay Area. People can log onto the Solar Beacon website and schedule their own personal show by designating where they would like the lights to shine.

"During the 75th Anniversary celebrations and the months that follow, the solar beam will directly link the line of sight between the public and the bridge they love," the project's website reads.

LIFE: 75 years of the Golden Gate

Solar Beacon is a feat of art and science, similar to the "International Orange" suspension bridge itself. Construction of the Golden Gate Bridge took four years and claimed the lives of 11 men. It nearly took the lives of 19 more whose fates were changed by a safety net installed under the bridge for workers. These 19 came to be known as the "Half-way-to-Hell Club."

Despite it's gruesome underpinnings, the bridge was heralded for its aesthetics upon its opening to the public in 1937 - prompting the San Francisco Chronicle to call it a "Thirty-five million dollar steel harp!"

The Golden Gate bridge has become a meaningful destination for Bay Area residents - many of whom will celebrate the anniversary at a festival today. 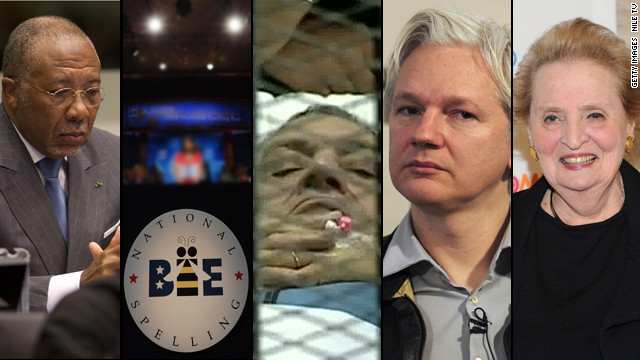 The first former head of state to be convicted of war crimes since World War II is expected to be sentenced Wednesday.

Charles Taylor, who was president of Liberia from 1997 to 2003, was convicted last month of aiding rebels in neighboring Sierra Leone in a campaign of terror that involved murder, rape, sexual slavery and conscripting children younger than 15.

There is no death penalty in international criminal law, and Taylor, 64, would serve out any sentence in a British prison.

Earlier this month, Taylor said he was wrongly portrayed, and that he tried to bring peace to Sierra Leone. He said his trial was corrupted by money, and that witnesses were paid off.

Will WikiLeaks founder be extradited to Sweden?

Britain's Supreme Court is expected to rule Wednesday on whether WikiLeaks founder Julian Assange should be sent to Sweden to face allegations of rape and sexual assault lodged by two women.

WikiLeaks, which facilitates the anonymous leaking of secret information, gained global fame in 2010 with the leaks of documents relating to the Iraq and Afghanistan wars, and then followed up by leaking nearly a quarter million State Department cables.  A U.S. Army intelligence analyst is facing charges on suspicion of leaking hundreds of thousands of classified military and State Department documents to WikiLeaks.

Assange has repeatedly denied the rape and sexual assault allegations. While fighting extradition, Assange has been under house arrest in Britain since December 2010. He recently started a talk show that he runs from Britain but airs on a Russian television network.

At 6 years old, Lori Anne Madison from Prince William County, Virginia, will become the youngest speller to participate in the Scripps National Spelling Bee this Wednesday in National Harbor, Maryland.

Madison was born on November 9, 2005. It was determined that she is the youngest according to records from the origination that date back to 1993. According to Mike Hickerson, a communications manager with the bee, there have been four spellers since 1993 that were 8 years old.

This year’s bee is scheduled for Wednesday and Thursday with 278 young spellers. They are competing for the main prize, which includes a $30,000 cash prize, engraved trophy, a $2,500 U.S. savings bond, a $5,000 scholarship, a Nook Color and from Encyclopaedia Brtiannica, $2,600 in reference works.

On Tuesday, 13 people will receive the Presidential Medal of Freedom at the White House. It is the nation's highest civilian honor, awarded  to those who make extraordinary contributions to world peace, national interest and security, or other cultural endeavors.

Jan Karski, a Polish Underground officer who delivered the first of the Holocaust's eyewitness accounts to the world, Gordon Hirabayashi, who defied the forced relocation and internment of Japanese Americans during World War II, and Juliette Gordon Lowe, founder of the Girl Scouts, will be awarded posthumously.

Former Egyptian President Hosni Mubarak is expected to be sentenced on Saturday. A final verdict will also be delivered in his trial on charges of corruption and ordering the deaths of more than 800 people who protested his regime and demanded his ouster.

In the event that Mubarak is found guilty, prosecutors formally requested in January a penalty of death by hanging. Throughout the trial, clashes outside of the courtroom have occurred between police and families of the slain protestors.

The ailing Mubarak, who was president from October 1981 to February 2011, has denied the charges. This sentencing comes more than a week after voting began in Egypt's presidential election

View our complete coverage of Egypt.

Former British Prime Minister Tony Blair is set to take the stand at the Leveson Inquiry on Monday. The inquiry was established in July to investigate a phone hacking scandal involving media giant Rupert Murdoch and his flagship British publication News of the World. Blair is expected to give oral testimony on the relationship between the press and people in positions of government power in the U.K.

NASA: Space Hubble will predict future of the galaxy 'with certainty'

Is it the end of the world as we know it? NASA scientists will host a public science update in Washington on Thursday explaining how the Hubble Space Telescope will "predict with certainty the next major cosmic event to affect our entire galaxy, sun and solar system." The briefing, which will discuss the odds of the Milky Way colliding with another galaxy billions of years from now, will be broadcast live on NASA Television and www.nasa.gov. NASA will also hold a live web chat following the press conference.

Pop icon Madonna will kick off her "MDNA" world tour  in Tel Aviv on Thursday. There are 76 shows already scheduled for the world tour of the 53-year-old material girl's latest chart-topping album. 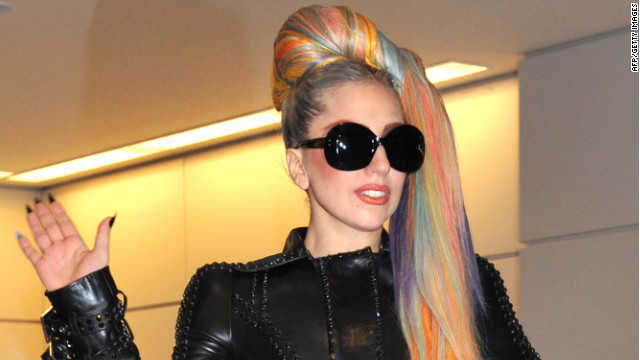 Earlier this month, Indonesian police had recommended Lady Gaga not be issued a permit because of security concerns.
May 27th, 2012
03:11 AM ET

Lady Gaga canceled her concert in Indonesia, her management said Sunday, citing security concerns after Islamic hardliners denounced her costumes and dance moves as too risqué.

If the concert is held, there are concerns the singer, her crew and attendees may be in harm's way, said Minola Sebayang, the lawyer for the promoters.

Police have detained two  American men as part of an investigation into the strangling death of an Irish exchange student in Tokyo, local authorities said Sunday.

Nicola Furlong, 21, was found dead in a hotel room with one of the men, according to Tokyo police.