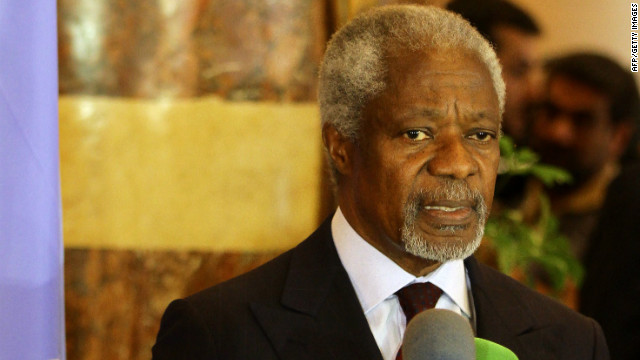 Annan: Syrian suffering 'must end and it must end now'

U.N. monitors say 108 people, including 49 children, were massacred in one Syrian town. Joint Special Envoy Kofi Annan is in Syria, though rebels say his peace plan is dead.

Annan delivered this statement to the press upon his arrival in Damascus:

"I have come to Syria at a critical moment in this crisis.

I am personally shocked and horrified by the tragic incident in Houleh two days ago, which took so many innocent lives, children, women and men. This was an appalling crime, and the Security Council has rightly
condemned it.

And I extend my profound condolences and my heartfelt sympathies to the families of the victims and to the wounded – in Houla and throughout the country.

The Security Council has requested the UN to continue to continue to investigate the attacks on Houleh. Those responsible for these brutal crimes must be held accountable. I understand that the Government is also investigating.

It is the Syrian people, ordinary citizens of this great country, who are paying the highest price in this conflict.

Our goal is to stop this suffering. It must end and it must end now.

I urge the Government to take bold steps to signal that it is serious in its intention to resolve this crisis peacefully, and for everyone involved to help create the right context for a credible political process. And this message of peace is not only for the Government, but for everyone with a gun.

The six-point plan has to be implemented comprehensively. And this is not happening.

I intend to have serious and frank discussions with President Bashar Al-Assad. I also look forward to speaking with a range of other people while I am here.

Thank you very much.