Uber says it has agreed to buy Postmates for $2.65 billion in an all-stock deal cnn.it/3gxgc7K

Ennio Morricone, the Oscar-winning film composer has died at the age of 91, his lawyer said cnn.it/2NVH4lx

Rescue workers in Japan are beginning a desperate search for survivors after dozens were left dead or missing folloâtwitter.com/i/web/status/1âŠEn

Eight people are believed to be dead after two planes collided over Coeur d'Alene Lake in Idaho and then sank, Kootâtwitter.com/i/web/status/1âŠQA

Broadway actor Nick Cordero, who had admirers across the world rallying for his recovery, dies at 41 after a battleâtwitter.com/i/web/status/1âŠR0

Remains found in Texas were identified as Army Spc. Vanessa Guillen, her family says. She had been missing since Apâtwitter.com/i/web/status/1âŠiu 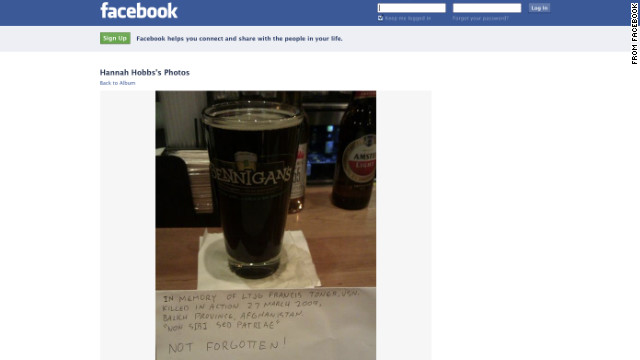 A bar patron's toast to a fallen sailor has become a phenomenon on Facebook.

On March 28, Hannah Hobbs, a waitress at a Bennigan's restaurant near Borger in the Texas Panhandle, posted a photo of a glass of beer, with a handwritten note from the customer that read:

In her photo caption Hobbs explained:

"This guy came in today and asked if it was ok if he left this on the bar.. I cried ðŠ I left it there until like 1130 tonight.... I didn't want to pour it out but I had to. So I'm posting this pic so it can stay forever!! So can I get some likes people??"

Toner, from Narragansett, Rhode Island, was one of two sailors killed when an Afghan National Army soldier opened fire on four officers who were jogging along the perimeter of Camp Shaheen in Mazar-e Sharif, Afghanistan, on March 27, 2009. After the shooting began, Toner, who was unarmed, verbally challenged the attacker and continued to advance until he was fatally wounded. His actions distracted the attacker from shooting other wounded officers and allowed another officer to seek help. For his actions, Toner was posthumously awarded the Silver Star, the nation's third-highest military decoration for valor. He was 26.

Lt. j.g. Francis Toner IV was awarded a posthumous Silver Star for his courage in Afghanistan.

Toner is buried in Arlington National Cemetery, whose website carries a news obituary written by Paul Davis of the Providence (Rhode Island) Journal. He was born in Panorama City, California, was an athlete and homecoming king at Westlake High School in suburban Los Angeles and trained at the Merchant Marine Academy on Long Island, New York, according to the article and Navy information on the website.

When he was killed, Toner was a week away from a leave of absence to visit his wife, Brooke, in Idaho, the article said. Adm. Mike Mullen, chairman of the Joint Chiefs of Staff, personally handed the Silver Star to Brooke Toner during a ceremony in September 2011.

"He was basically walking straight into the enemy's fire," Mullen said. "We shouldn't - and we won't - ever, ever forget that service, that sacrifice. Because that is what makes us strong, as a military and as a nation."

Hobbs, the Bennigan's waitress, said she has been surprised by the Facebook community's strong reaction.

"I never meant it to be more than a personal gesture," she said in a Bennigan's news release. "I felt taking a photo and sharing it on Facebook would keep the memorial alive. Several family and friends have served in the military, and I feel we don't do enough as a country to show our appreciation to those that put their lives on the line to keep us safe."

Taking a cue from Hobbs, the restaurant chain has created the "Bennigan's Wall of Heroes." Patrons may purchase a beer and leave a note for any member in the U.S. military, past or present.

Pictures of the beer and note should be posted on the company's Facebook timeline. Bennigan's has pledged to donate $1 for every photo, through Memorial Day, to Operation Homefront, a nonprofit organization that provides emergency financial and other assistance to the families of our service members and wounded warriors.

As health services around the world continue to focus their resources on ending the coronavirus pandemic, they threâtwitter.com/i/web/status/1âŠj7
cnni

9:25 am ET July 6, 2020 RETWEET
The Mona Lisa, normally mobbed by people, can now be viewed by visitors following a one-way route and observing socâtwitter.com/i/web/status/1âŠQW
cnni

8:54 am ET July 6, 2020 RETWEET
Prince Harry and Meghan, Duchess of Sussex, have encouraged Britain to reckon with its colonial past, highlightingâtwitter.com/i/web/status/1âŠwS
cnni