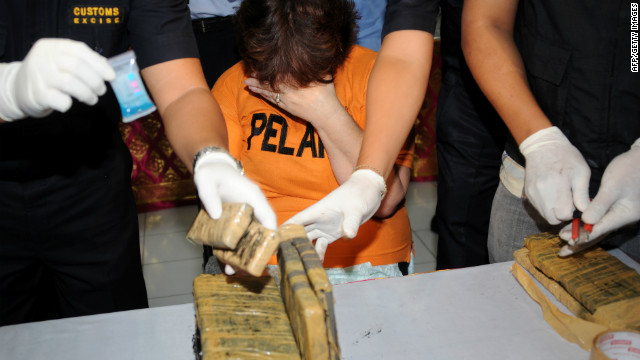 Briton Lindsay June Sandiford covers her face as officials display evidence at a customs office in Bali.
May 29th, 2012
04:09 AM ET

British housewife caught with $2.6M in cocaine could face death

A British woman could face the death penalty after being found with an estimated $2.6 million worth of cocaine in her luggage by Indonesian authorities.

Lindsay June Sandiford, 55, was found to have blocks of cocaine weighing almost 4.8 kilograms in her suitcase after she arrived on the island of Bali on a Thai Airways flight earlier this month, government officials said.

Sandiford, described by British media reports as a housewife, did not speak as she was paraded at a press conference Monday wearing a prison-issue orange T-shirt.

Three other Britons - one woman and two men - and an Indian man are also being questioned, Bali police narcotics chief Mulyadi told reporters. They are accused of being part of an international syndicate, he said.