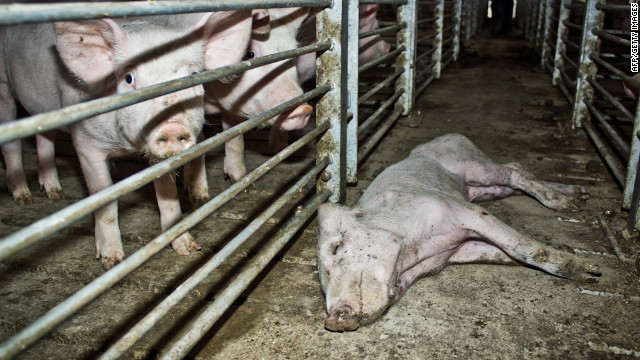 A dead pig lies among others at the Agrosuper slaughterhouse last week in Freirina, Chile.
May 29th, 2012
10:23 AM ET

Half-million pigs to be slaughtered in Chile health emergency

A half-million pigs on a Chilean farm will be destroyed after the facility was closed for several days during a dispute with local residents.

Jose Guzman, chief executive of Agrosuper, which owns the farm, said the animals would be killed rather than moved, according to a report from Agence-France Presse.

"They are going to be slaughtered. They are not going to another farm, nor to another plant," Guzman is quoted as saying.

The events that precipitated the slaughter began this month when villagers from Freirina blockaded the farm after months of protests about foul odors and disease-infested water they said emanated from the farm and its slaughterhouse. The 500,000 pigs went unattended for five days, prompting the Chilean government to declare a sanitary emergency, according to a report from MercoPress.

Agrosuper was given six months to move the pigs and remedy the sanitary problems with the plant, MercoPress reported.

But Guzman said no other area would accept the animals nor were there enough trucks to transport them, according to AFP.

The pig farm and slaughterhouse in the village 500 miles (about 800 kilometers) north of Santiago were given a government go-ahead in 2006 but didn't work as planned, according to MercoPress.

The facility was supposed to have a system where micro-organisms would break down the pig waste, MercoPress reported.

"However, because of airing problems, the system failed and the micro-organisms did not develop generating a massive accumulation of organic disposable matter plus an unbearable stench, which took over the small village of Freirina triggering the conflict," the MercoPress report said.

In a report in The Santiago Times, Guzman said Agrosuper was in the process of fixing the problems with the plant when the protesters shut it down.

‚ÄúWe didn‚Äôt abandon the plant; we evacuated, which is very different,‚Äù Guzman is quoted as saying.

Four-time Olympic gold medalist Mo Farah is under the spotlight for injections he received ahead of the London Mara‚Ätwitter.com/i/web/status/1‚Ä¶7L
cnni

11:40 am ET February 25, 2020 RETWEET
Dozens of tourists were being asked to remain in their rooms at a hotel in the Canary Islands on Tuesday after a gu‚Ätwitter.com/i/web/status/1‚Ä¶ib
cnni

11:05 am ET February 25, 2020 RETWEET
A diocese in northern Italy is suspending Ash Wednesday services tomorrow due to the coronavirus outbreak. There wi‚Ätwitter.com/i/web/status/1‚Ä¶DG
cnni