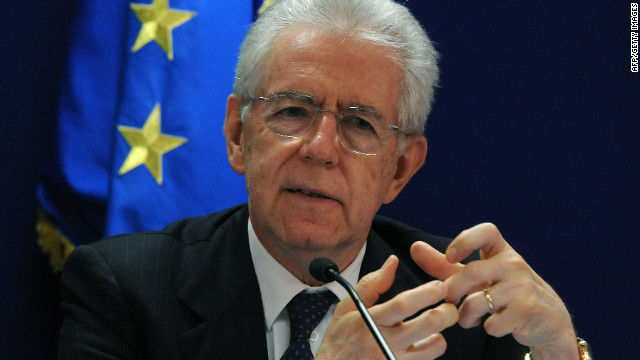 Italian Prime Minister Mario Monti says soccer in his country may need to be suspended for two or three years.
May 29th, 2012
01:07 PM ET

Italy might be better off without soccer for a few years in the wake of new arrests in a match-fixing probe in the top-flight Serie A, Prime Minister Mario Monti said Tuesday.

"Maybe soccer should be suspended for two or three years," Monti said, according to a report from Italy's ANSA news service. "It's not a government proposal, but it's a question we should ask ourselves."

Nineteen people were arrested Monday in the ongoing investigation by magistrates in Cremona. Eleven of those arrested are players in Italy's top division.

"It's particularly sad when a world-like sport, which should express noble values, shows itself to be a concentrate of the most reproachful ones, like unfairness, illegality and fraud," Monti said Tuesday in the ANSA report.

Maurizio Zamparini, owner of the Palermo club, ripped Monti for the suspension suggestion.

“Monti speaks only nonsense. He should think before he speaks. Before he says that we have to ‘stop the game of football,' he should think about his problems and all that he is destroying and he is shutting down with his measures," Zamparini is quoted as saying on the website Football Italia.

Roberto Di Martino, chief prosecutor in the case, said the investigation was spreading beyond Italian borders, with five people arrested in Hungary.

"We have evidence that this Hungarian gang worked to fix in Serie A 2010-11 the games between Bari and Sampdoria, Lecce and Lazio and some others.

"We have different evidence of their presence in Italy and of their contacts with people from Singapore, where the money is coming from."

The arrests are the latest in a long-running saga that has cast a shadow over Italian football. In 2006, the Calciopoli match-fixing scandal saw Juventus relegated to the second tier and stripped of two league titles.

Seventeen people were arrested in a similar swoop last year, the most high profile of which was Atalanta captain Cristiano Doni. He was subsequently banned from the game for three years.