US Rep. Lauren Boebert paid utility and rent bills with campaign funds, according to a new Federal Election Commiss‚Ätwitter.com/i/web/status/1‚Ä¶oU

Tropical Storm Sam forms in the Atlantic, more than 1,700 miles east of the Leeward Islands. The storm is ‚Äãexpectedtwitter.com/i/web/status/1‚Ä¶IIWU

The Department of Homeland Security temporarily suspends use of horse patrol in the Del Rio sector of the US southe‚Ätwitter.com/i/web/status/1‚Ä¶y8

Daniel Foote, US special envoy to Haiti, resigns, citing the "inhumane" US decision to deport thousands of Haitian‚Ätwitter.com/i/web/status/1‚Ä¶gu 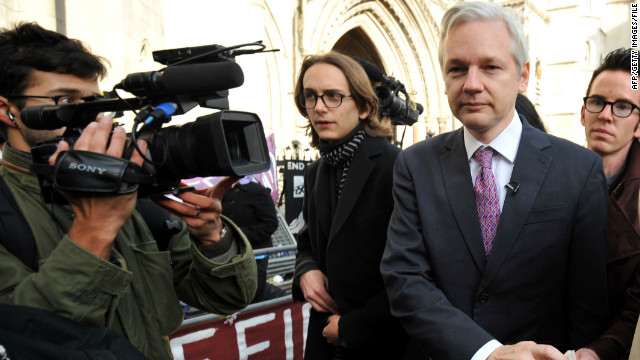 WikiLeaks founder Julian Assange leaves London's High Court in December in his fight against extradition to Sweden.
May 30th, 2012
04:28 AM ET

Assange court to rule on extradition over sex claims

Britain's Supreme Court is due to rule Wednesday on whether WikiLeaks founder Julian Assange should be extradited to Sweden to face interrogation on sexual assault allegations against him.

The decision will mark the end of Assange's second and final appeal in Britain against an extradition order handed down in February 2011.

Two women in Sweden accused Assange in August 2010 of sexually assaulting them during a visit to the country in connection with WikiLeaks' release in summer 2010 of internal U.S. military documents.

WikiLeaks' work is not at issue in the extradition hearing or the Swedish allegations against Assange.

2:19 pm ET September 23, 2021 RETWEET
Dinosaurs, like us, got sick and injured. Until relatively recently, however, diagnosing multi-million-year-old di‚Ätwitter.com/i/web/status/1‚Ä¶v6
cnni

2:00 pm ET September 23, 2021 RETWEET
Police are looking for a man in Canada they say punched a nurse in the face multiple times, knocking her to the gro‚Ätwitter.com/i/web/status/1‚Ä¶h0
cnni

1:41 pm ET September 23, 2021 RETWEET
Sabina Nessa, a 28-year-old teacher from south London, is believed to have been murdered on the five-minute walk fr‚Ätwitter.com/i/web/status/1‚Ä¶1B
cnni