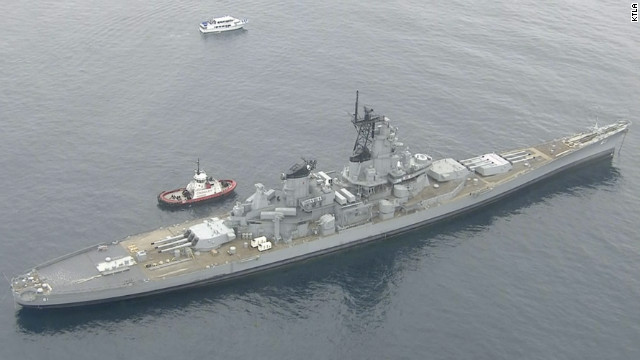 The battleship USS Iowa was at anchor off the coast of Los Angeles on Wednesday morning, completing a four-day journey south from San Francisco.

The World War II-era ship will become a museum and tourist attraction in San Pedro, with a grand opening planned for July 7.

The Iowa had spent more than a decade docked in the Port of Richmond near San Francisco before being towed down the California coast.

It will be operated as a museum by the nonprofit Pacific Battleship Center.

The group's Facebook page said Wednesday that the ship will undergo a complete cleaning of its hull while anchored off Los Angeles and then be towed to a temporary berth in port Saturday.

Every year, tens of millions of Hindu pilgrims wade into the Ganges River, seeking salvation from the eternal cycleâ€twitter.com/i/web/status/1â€¦Kt
cnni

7:57 pm ET January 15, 2021 RETWEET
The perceived success of last week's deadly insurrection at the US Capitol is "like putting gasoline on a fire" andâ€twitter.com/i/web/status/1â€¦fv
cnni

7:35 pm ET January 15, 2021 RETWEET
New, more contagious variants of the coronavirus will likely accelerate the spread of Covid-19 and that means the Uâ€twitter.com/i/web/status/1â€¦KS
cnni