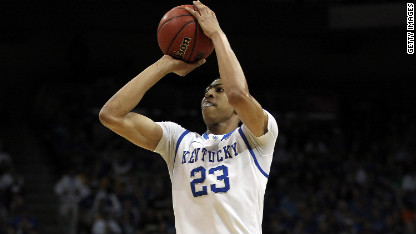 The worst teams in the NBA went into the evening hoping for the best of luck in the lottery, which determines the order of the league's June 28 draft of college (and a few high school) players. The lottery was held at ABC's "Good Morning America" studio in New York.

The lottery is weighted, so the team with this season's worst record, the Charlotte Bobcats, had the best chance of getting the coveted No. 1 pick. But it's not a sure thing, as the Hornets' prize illustrates. The Hornets had the fourth-worst record this season but will select first; the Bobcats will choose second. Last year, the league's eighth-worst team, the Cleveland Cavaliers, won the lottery and were able to grab top-rated Duke point guard Kyrie Irving. The Cavaliers were in the lottery again this year, as they failed to reach the playoffs despite having Irving.

Here is how the 2012 NBA Draft Lottery shook out:

The Antarctic ozone hole, which forms every year over the South Pole between August and October, is now larger thanâ€twitter.com/i/web/status/1â€¦H2
cnni

11:36 pm ET September 16, 2021 RETWEET
Vaccine advisers to the US Food and Drug Administration will start meeting early Friday to discuss whether Americanâ€twitter.com/i/web/status/1â€¦K5
cnni