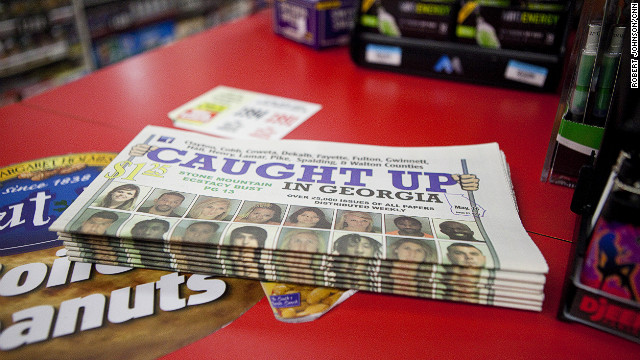 Are some U.S. citizens paying for the crimes - real or alleged - of their past, long after theyŌĆÖve done their time?

Donald McMahon, a convicted criminal turned contributing member of society, thinks so and shared his story with CNN. McMahon said he is constantly haunted by the ghosts of his past, his former self constantly resurrected on the pages of publications and websites that post old mug shots then demand large sums of money to remove or hide them.

The story was a catalyst for debate on CNN.com, causing readers to opine on everything from rights to privacy versus the rights of the accused to whatŌĆÖs fair in the pursuit of earning a dollar.

MugshotMadness: As a publisher of a few "mug shot" sites, I feel that I am doing a service for the communities in which we publish. I understand how having your mug shot posted online could adversely affect someone. You also have to understand a couple other things. This info is public and if you had not been arrested, your photo would not have been on our sites. We are one of the few sites who do not not charge to remove a record IF you can send us verifiable information that the charges were dropped or you were found not guilty. I will admit that I am in this business to make a buck, but that does not mean I do not have a heart. If you show up on my sites, it's because of your actions and not because I am trying to extort you.

MichelleBD: "Stop being a victim/take responsibility...." and similar BS mantra sound like something off Fox News. These people are trying to move on with their lives while this lowlife is digging up dirt and publishing it and then demanding large sums of money to take it off. That's like tossing an anvil to a drowning victim and then blaming them for their own drowning. The people that own these sites could not care less about the public's interest, it's all about making a quick buck instead of working at a real job.

In a digital age - is your reputation your responsibility? Or do we need government intervention?

Kristine Harley: How about creating new content about yourself? Blog your positive achievements, post constructive comments on sites, upload videos to YouTube and get friends to comment on them. Build a website of your achievements, your charitable intentions, etc. At least counter your past with your present.

pearlyQ: We should at least be protected from "for-profit mug shot websites and newspapers" that only wish to exploit and extort. They are currently "legal" because arrest pictures and records are legal. These records should only be legal for government agencies and authorized parties use.

Your past, your problem?

meglee56623: I'm sorry, but if you did the crime then you deserve to have you mug shot out there for the world to see! You apparently didn't care at the time and did your crime anyways so you asked for it. I don't feel sorry for you one bit. Everyone and I mean everyone has something horrible happen in their life at one point or the other. My dad died when I was 14 years old! And I was heartbroken ... couldn't eat or sleep for days and I was finally put on meds from being so depressed. That did not give me the excuse to go get hooked on drugs or drink my life away or anything else people do and then blame the life events on it. Grow up people.

pabloinbama: I agree. ┬ĀStop acting like a victim and take control / responsibility for your own life.

pfcusmc1:┬Ā Good job on making the story about you. This guy didn't drink his life away either. He recognized the problem and took corrective action. The point at which he reached rock bottom was different from yours but from┬Āthe story, it sounds like to me he is a productive member of society. Maybe one day there will be a website out there exploiting mentally unstable people and your picture will pop up on it from the time you spent grieving you fathers death. You, too, are a healthy productive member of society now but at one point in time, you weren't.

A crime in itself?

Lauren Starling:┬Ā This IS extortion, and┬Āunfortunately┬Āit's usually against people that can afford it the least and now won't be able to get that job they need to ensure they stay out of a life of crime. ┬ĀA person in this situation doesn't have many options: Either: 1) pay the extortion sites to remove them 2) pay an attorney for nothing, most likely, as this is all legal. 3) Pay an online reputation manager ┬Ālike myself to bury the results. There is a fourth option, though and that is to take control and do it yourself. You don't have to be a genius to dominate the first and second page for your name on Google. I'm currently doing case studies on the fastest and surest ways to fight back against these sites in the search engines. Once I┬Āfinish,┬ĀI'll publish the information I obtained in hopes to help people like Donald learn how best...

Joe Smith: This is blackmail plain and simple.

Shining a light on the failures of our justice system?

Keepalow:┬Ā It's a matter of choice. I have chose to live my life without ever seeing the inside of a jail cell. So why would I feel sorry for anyone that had the same opportunity but chose to F up.

Jackbnimbler: Apparently you know little about what is really going on in the U.S. You should go to a prison and look around, get to know some of the circumstances.

And it's not always your choice ... The law is not always black and white but shades of gray, as no doubt you've heard.

Chris Koffend,┬Ā Yeah, I am sure that all these people with their mug shots on line are the victims of wrongful arrest.

Last week the grim extent of the outages was laid bare when South Africans were advised to bury dead loved ones witŌĆtwitter.com/i/web/status/1ŌĆ”LE
cnni

7:25 am ET January 31, 2023 RETWEET
Unions and opposition parties have called for people to protest in major cities, hoping for a repeat of the first mŌĆtwitter.com/i/web/status/1ŌĆ”Yv
cnni

Last week the grim extent of the outages was laid bare when South Africans were advised to bury dead loved ones witŌĆtwitter.com/i/web/status/1ŌĆ”LE
cnni

7:25 am ET January 31, 2023 RETWEET
Unions and opposition parties have called for people to protest in major cities, hoping for a repeat of the first mŌĆtwitter.com/i/web/status/1ŌĆ”Yv
cnni