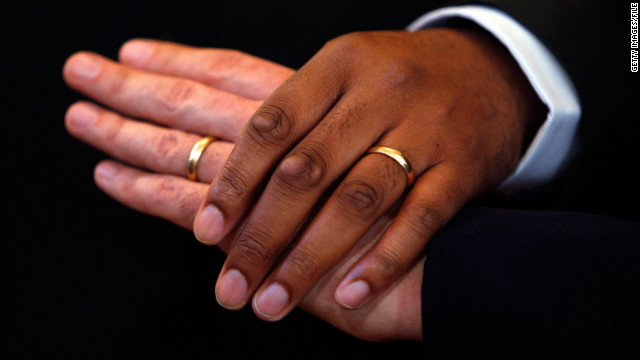 The 1st U.S. Circuit Court of Appeals in Boston has ruled the Defense of Marriage Act, the federal law that defines marriage as a union between a man and a woman, discriminates against gay couples.

In the unanimous ruling, a three-judge panel agreed with a decision made by a lower court in 2010 that DOMA is unconstitutional on the basis that it interferes with an individual state's right to define marriage.

“Invalidating a federal statute is an unwelcome responsibility for federal judges; the elected Congress speaks for the entire nation, its judgment and good faith being entitled to utmost respect,’’ the ruling said. “But a lower federal court such as ours must follow its best understanding of governing precedent, knowing that in large matters the Supreme Court will correct mis-readings.”

At issue is whether the federal government can deny tax, health and pension benefits to same-sex couples in states where they can legally marry.
"If we are right in thinking that disparate impact on minority interests and federalism concerns both require somewhat more in this case than almost automatic deference to Congress' will, this statute fails that test," said the three-judge panel.

In the ruling, the judges said that they weighed various factors. While they noted that the law does discriminate against a group that has, like many others, faced oppression, they did not view the federal law as something fueled by anti-homosexual  sentiment.

“As with the women, the poor and the mentally impaired, gays and lesbians have long been the subject of discrimination,’’ the ruling said. “In reaching our judgment, we do not rely upon the charge that DOMA’s hidden but dominant purpose was hostility to homosexuality. The many legislators who supported DOMA acted from a variety of motives, one central and expressed aim being to preserve the heritage of marriage as traditionally defined over centuries of Western civilization.’’

“Today’s landmark ruling makes clear once again that DOMA is a discriminatory law for which there is no justification," she said in a press release. "It is unconstitutional for the federal government to create a system of first- and second-class marriages, and it does harm to families in Massachusetts every day. All Massachusetts couples should be afforded the same rights and protections under the law, and we hope that this decision will be the final step toward ensuring that equality for all.”

Last year President Obama announced that the Justice Department would no longer argue for the constitutionality of the ban on same-sex marriage.

"My Justice Department has said to the courts, we don't think the Defense of Marriage Act is constitutional," the president said on "The View" earlier this month. "This is something that historically had been determined at the state level and part of my believing ultimately that civil unions weren't sufficient."

In an interview with ABC this month, Obama also officially expressed support for members of the same gender to legally wed.

"I've just concluded that for me, personally, it is important for me to go ahead and affirm that I think same-sex couples should be able to get married," Obama said in the interview.

By the numbers: Same-sex marriage | Read the full opinion