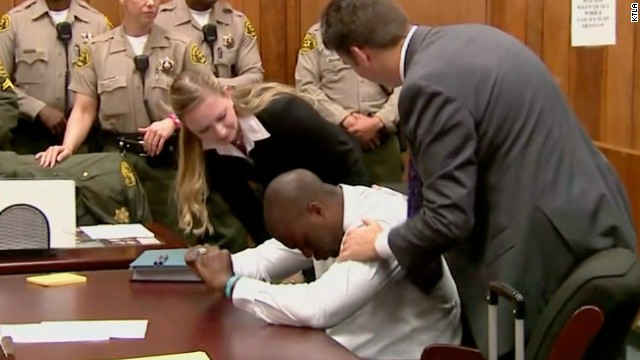 Brian Banks breaks down in a California courtroom after his rape conviction is expunged.
May 31st, 2012
11:57 AM ET

A Southern California man exonerated last week on a decade-old rape conviction was looking ahead Thursday to try to relaunch a dream taken from him because of prison time he served in the case, the chance to play in the National Football League.

Brian Banks was a football standout at Long Beach Polytechnic High School and had been offered a scholarship to play at the University of Southern California when he was accused of rape.

Fearing a potentially long sentence, he followed the advice of his attorney and pleaded no contest to assaulting a classmate.

A judge in California tossed out his conviction last week.

It didn't take long for NFL teams to start contacting Banks with tryout invitations, according to news reports, with six in line to work him out.

First among them was the Seattle Seahawks, coached by Pete Carroll, the same man who offered that scholarship to Banks a decade ago, according to a report in the Seattle Times.

"I feel very confident in getting that tryout and producing on the field," Banks said. "I've been working extremely hard for this opportunity."

Banks was a linebacker in high school, and his team won a state championship when he was a junior, according to the Seattle Times report.

A Super Bowl championship is obviously a long way away, but the 6-foot-2, 245-pound Banks told ESPN's Rick Reilly he has been working out since October and is confident he's ready to take the first step in the NFL.

"I'll make 'em happy," ESPN quotes him as saying. "After all I've been through these last 10 years, I can still do some things that will impress you."

‚Äú‚Ä¶. In one, Ms. Hutchinson told the panel she was told to ‚Äúprotect‚Äù certain individuals to ‚Äústay in good gtwitter.com/i/web/status/1‚Ä¶o/8rlXupbTna
susancandiotti

10:26 pm ET June 30, 2022 RETWEET
NYT: ‚Äúraising legal and ethical questions about whether the former president may be influencing testimony with a ditwitter.com/i/web/status/1‚Ä¶Fhsy
susancandiotti

10:21 pm ET June 30, 2022 RETWEET
RT @maggieNYT: Trump is on the verge of a likely next campaign and Cheney is eviscerating him as a threat to the Republic in a speech at th‚Ä¶
susancandiotti

8:33 pm ET June 30, 2022 RETWEET
Are you planning to travel for the Fourth of July? Rain might alter your plans. Here‚Äôs what to expectcnn.it/3a0SNOpyM
CNNweather

RT @CNN: Rep. Judy Chu of California was among the more than 100 people arrested at an abortion rights protest in Washington, DC, on Thursd‚Ä¶
cnnbrk

10:16 am ET June 30, 2022 RETWEET
The Supreme Court curbs the federal government‚Äôs ability to fight climate change. The decision is one of the most ctwitter.com/i/web/status/1‚Ä¶nygL
cnnbrk