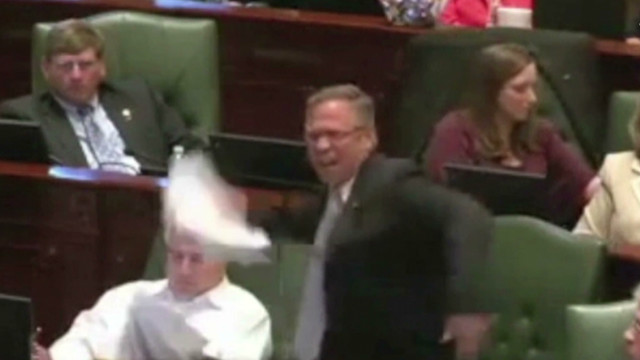 State Rep. Mike Bost lost his temper on the floor of the Illinois House of Representatives, flinging a copy of a new pension reform proposal in the air while screaming at the top of his lungs. His rant reminds us of other politicians famously screaming in front of the cameras, including former Democratic presidential candidate and former Vermont Gov. Howard Dean and Republican Phil Davison of Ohio. Watch as these men passionately make their mark in the history books and viral video "stardom."

See why Illinois state Rep. Mike Bost threw papers into the air and screamed at the top of his lungs while the Illinois House was in session.

Republican Phil Davison didn't win his campaign for Treasurer of Ohio's Stark County, but his impassioned campaign speech made him a "winner" on YouTube. See why his startlingly emotional campaign speech attracted more than 160,000 video views.

See why some say Howard Dean's famous scream "heard around the world" was portrayed as a media gaffe that ended his bid for presidency.