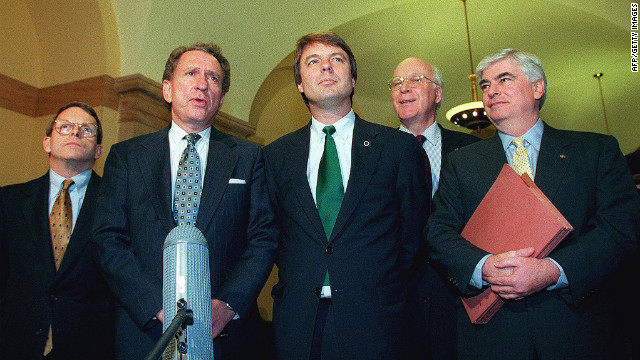 John Edwards not guilty of illegal campaign contributions; mistrial on other charges

[Updated at 4:31 p.m. ET] The judge in the John Edwards trial has declared a mistrial on all counts except for the one on which the jury found the former presidential candidate not guilty, CNN producers in the courtroom said Thursday.

The jury has been dismissed by the judge.

CNN Producer Ted Metzger said that the decision came after the jury sent a note saying they had exhausted all options. All of the lawyers read over the note, as did Edwards, who did not react.

When the judge read the final verdict and declared a mistrial on other charges, Edwards had an expression of relief but also pain that the trial might have to go on again, Metzger said.

[Updated at 4:24 p.m. ET] The jury in the John Edwards trial has found the former presidential candidate not guilty on count three of accepting illegal campaign contributions from heiress Rachel "Bunny" Mellon in 2008.

The jury said it was deadlocked on the other charges.

That was the sole count the jury had earlier that they had reached a unanimous verdict on. The jury was still deadlocked on the other charges.

The Justice Department will now have to decide whether to try him again on the other charges.

[Updated at 3:08 p.m. ET] The judge in former North Carolina Sen. John Edwards' federal corruption trial has ordered jurors to continue deliberations after they announced they had reached a verdict on only one of six counts.

The judge will soon issue an "Allen charge," which is essentially a request from the court for the jury to go back into deliberations and try again to reach a unanimous verdict on all counts.

[Updated at 2:55 p.m. ET] The prosecution has asked for the jury to go back in the jury room to deliberate. The defense has asked for a mistrial on the remaining counts.

The judge is taking a five minute recess on the matter. The judge has the option to issue an "Allen charge," which is essentially a request from the court for the jury to go back into deliberations and try again to reach a unanimous verdict on all counts.

What are the charges against John Edwards?

[Posted at 2:53 p.m. ET] The jury in the John Edwards trial has only reached a unanimous decision on one charge against John Edwards.

The group of jurors said that as of this moment they could only agree on the charge of illegal campaign contributions from Rachel "Bunny" Mellon. We do not know which way the jury decided on that count.

Edwards, a former Democratic U.S. senator and presidential candidate, was charged with accepting illegal campaign contributions, falsifying documents and conspiring to receive and conceal the contributions. The charges carry a maximum sentence of 30 years in prison and a $1.5 million fine.

Jurors last week asked to review all the exhibits, indicating they were in it for the long haul.

Defense attorneys argued that Edwards was guilty of nothing but being a bad husband to his wife, Elizabeth, who died in 2010. They also argued that former Edwards aide Andrew Young used the money for his own gain and to pay for Hunter's medical expenses to hide the affair from Edwards' wife.

Neither Edwards nor Hunter testified during the trial. The affair occurred as Edwards was gearing up for a second White House bid in 2008, and he knew his political ambitions depended on keeping his affair with Hunter a secret, Assistant U.S. Attorney Robert Higdon told jurors in closing arguments.

Edwards accepted $725,000 from Mellon and more than $200,000 from Baron, prosecutors said. The money was used to pay for Hunter's living and medical expenses, travel and other costs to keep her out of sight while Edwards made his White House run, prosecutors say.