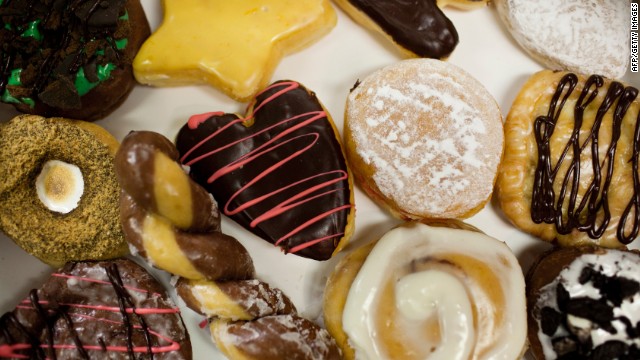 Overheard on CNN.com: Doughnut lovers' lament, washed down with a giant soda

New York Mayor Michael Bloomberg has been talking about a proposal to ban selling sodas and sugary drinks larger than 16 ounces at restaurants and food carts. This move generated a huge amount of conversation from our readers, and we highlighted a selection of comments on the CNN Mash-up.

Friday happens to be National Doughnut Day, and a few readers are tying the soda and pastry issues together.

Bloomberg's signature is on a proclamation declaring June 1, 2012, to be "NYC Donut Day" in honor of the 75th year of this tradition, which honors dessert-serving Salvation Army volunteers during World War I. The proclamation is posted on a New York Times blog.

A special gift, then? (Krispy Kreme is also marking its 75th birthday this year.)

Jeff: "How am I supposed to wash down my 12-inch doughnut with this piddly little 16 ounce drink?"

The most-liked comment from the "Big Gulp" piece suggested giving the proverbial sibling something to do. Others said they think obesity is becoming too big a problem.

Rosemary Sterner: "Maybe if Big Brother would bring back physical education and recess to schools, half the problem would be solved."

Jeremy Iverson: "I hate the government telling me what I can/can't do, but Americans are SOO fat. It's hard not to support this on some level if for nothing else than the message it sends."

Many readers talked about the American diet. This reader says Bloomberg should focus on knowledge.

scnn1a: "Wouldn't it be better if Bloomberg tried to educate people on why to avoid sugary drinks? It seems to me that if people are ignorant they'll just get hooked on to another bad habit! Then doughnut shops will do more business."

This person says there's something to be said for Bloomberg's ideas.

amirite: "I'm so sick and tired of having to pick from supersaturated corn syrupy nasty drinks with my meal. There are some sodas that have half the calories of what's in Pepsi and Coke products and they taste BETTER than the nasty supersweet crap. I want a drink, not a birthday cake in my soda. Others are right, the soda sizes have gone crazy. Drinking a large drink like those banned is like eating a dozen of doughnuts instead of a couple, or eating a whole chicken instead of a serving. Big drinks do make you fat."

New York and California, in the crosshairs.

ThisGADude: "NYC's biggest problem isn't soda. It's a mental deficiency that tends to make one believe you know everything regardless of how ridiculous you sound. The symptoms are prevalent in California, too."

jlerari11: "Bloomberg really doesn't get America. The fact that you can buy a 64 ounce Super Gulp for 99 cents makes it the greatest country on Earth. If you want to dictate our food portions, go govern China or Cuba. Besides, we are not fat because of the availability of large soft drinks. We are fat because so many of us just quit moving. We sit behind a computer for 8 hours and then behind the TV for another 4. What would you expect your body to look like? Do you think a 12 ounce Diet Coke is going to fix that?"

iReporter Sean Cochran of Joliet, Illinois, said in a video post that he actually would support a sugary drinks rule in his town.

“I just feel that we (Americans) find every excuse not to lose weight or get in shape. Yet we always complain that we are too fat or that we need to diet. The first time someone tries to make us do something healthy, all we do is complain. I would welcome the change in Illinois.”

Many looked to the future. Could other kinds of, um, dietary changes be on the horizon?

For everyone else, there's this dining option.

Didelphis325: "I'd love to start a restaurant down here in GA and call it 'Banned in NYC.' Our menu would consist only of items that were deep-fried, pan-fried, chicken-fried or barbecued. Vegetables would include fried okra, fried mushrooms, fried onion rings, fried green tomatoes, french fries or fried corn. Beverages would all be larger than 16 ounces. Although we could not allow smoking, we would have spittoons for those who cared to chew. Every chair would have a picture of Bloomberg on the seat. I consider myself a liberal but this guy is something else."

What's your take? Share your opinion, or just your doughnuts, in the comments area below and in the latest stories on CNN.com. Or sound off on video via CNN iReport.