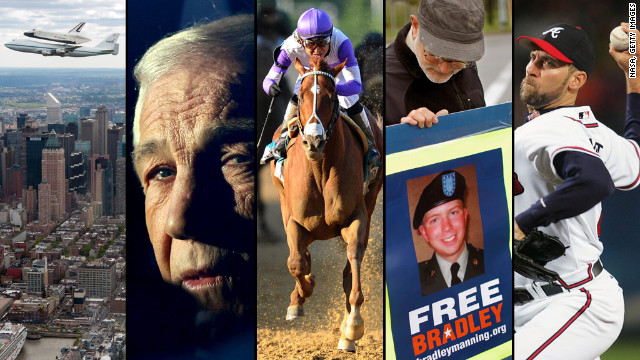 Here is a look at stories CNN plans to cover this week:

These are the voyages of the Space Shuttle Enterprise. The prototype orbiter, which never went to space but did go to New York on April 27, will be placed on a barge Monday and carried down the Hudson River to Bayonne, New Jersey. There it will be transferred to another barge, this one with a crane. The second barge will carry it back up the Hudson and lift the shuttle onto the deck of the USS Intrepid Museum, a former aircraft carrier and Enterprise's final destination.

Venus to stroll across the sun

A mini-eclipse of sorts will happen Tuesday when the planet Venus crosses between the sun and Earth. The event, called a transit of Venus, will occur late in the daylight hours of Tuesday in the United States and take about seven hours to complete. Some of the best and longest views will be in the South Pacific, so start heading for Tahiti now. During the transit, Venus will appear as a tiny dark speck crossing the disc of the sun from left to right. But remember: It's always dangerous to look directly at the sun. Use the same precautions you would with a solar eclipse: special light filters, a welder's mask or a pinhole viewer. If you're interested, you'd better get out there and look - it won't happen again for 105 years.

The trial of former Penn State assistant football coach Jerry Sandusky is due to begin Tuesday in State College, Pennsylvania. Sandusky, 68, has been under house arrest since being charged with sexually abusing 10 young boys over a 14-year period. He has pleaded not guilty to the charges.

Related allegations that university officials failed to act on a complaint about Sandusky led to the November firing of the school's president and of lauded Penn State head football coach Joe Paterno, who died of lung cancer three months later. Tim Curley, Penn State's former athletic director, and Gary Schultz, a former university vice president who oversaw campus police, have been charged with perjury and failing to report an alleged 2001 sexual assault of a child. Both have pleaded not guilty.

Wisconsin Gov. Scott Walker faces voters Tuesday in an election called for the purpose of deciding whether he should complete his term of office. Walker outraged liberals and labor unions two years ago when he pushed through sweeping legislation that limited pay increases for state employees and gutted the collective bargaining rights of unions. Voters on Tuesday will choose between retaining Walker, a Republican, or replacing him with Tom Barrett, the Democratic mayor of Milwaukee.

The Electronic Entertainment Expo, or E3, the world's premier trade show for computer and video games and related products, will take place Tuesday through Thursday at the Los Angeles Convention Center. The show is put on by the Entertainment Software Association, a leading trade group.

A pretrial hearing will begin Wednesday for Bradley Manning, the Army intelligence analyst suspected of leaking hundreds of thousands of classified military and State Department documents while serving in Iraq. Many of those documents ended up on the WikiLeaks website. The charges include aiding the enemy, wrongfully causing intelligence to be published on the Internet, transmitting national defense information and theft of public property or records. He could go to prison for life if convicted. The hearing could last until Friday. Manning's trial is scheduled for September.

Before their interleague game Friday against the Toronto Blue Jays, the Atlanta Braves will retire uniform No. 29 in honor of former pitcher John Smoltz. According to baseball-reference.com, Smoltz compiled a 213-155 record in his 21-year career, which ended after the 2009 season. Though a starter for much of his career, he also earned 154 saves as a relief pitcher. He amassed 3,084 strikeouts and a 3.33 earned-run average. He won the Cy Young Award as the National League's best pitcher in 1996, when he was part of a Braves rotation that included likely Hall of Famer Greg Maddux, two-time Cy Young winner Tom Glavine and fellow Michigan native Steve Avery. At a luncheon Friday, Smoltz will be inducted into the Braves Hall of Fame.

Will we have a Triple Crown winner?

The surprising athlete called I'll Have Another will try to make horse racing history Saturday in the 144th running of the Belmont Stakes. The Belmont is the third jewel in thoroughbred racing's Triple Crown; I'll Have Another captured the first two jewels, the Kentucky Derby and the Preakness Stakes, in breathtakingly close contests in May. Only 11 horses have won the Triple Crown. The last was Affirmed in 1978. California racing authorities suspended I'll Have Another's trainer, Doug O'Neill, for an incident involving another horse, but it won't keep him from participating in the Belmont.

The Broadway world will hand out its biggest prizes Sunday. The Tony Awards show will be broadcast from the Beacon Theatre at 8 p.m. ET and 8 p.m. PT on CBS, with Neil Patrick Harris as host. Actor Hugh Jackman and the Actors' Equity Association will receive Special Tony Awards for their contributions to┬Ā theater, and actress Bernadette Peters will be honored with the Isabelle Stevenson Award for her charitable work.

A World War II Royal Air Force pilot's uniform is set to be sold at auction after it was discovered wrapped in newsŌĆtwitter.com/i/web/status/1ŌĆ”GQ
cnni

12:03 am ET July 31, 2021 RETWEET
Ashton Kutcher and Mila Kunis say they don't believe in bathing their kids or themselves too much. "If you can seeŌĆtwitter.com/i/web/status/1ŌĆ”u8
cnni