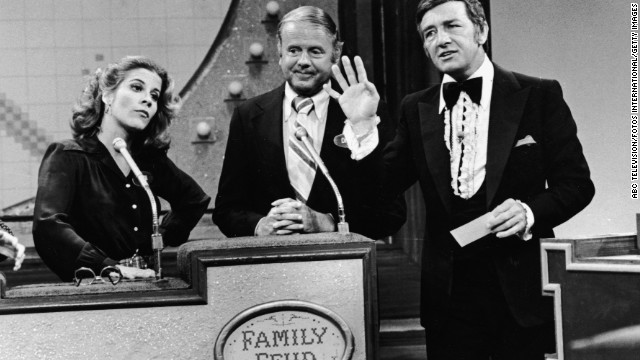 "It's like my dad said, 'There are people dying now who never died before.' RIP Richard, you were a big part of my childhood.
- Jim Steele

Richard Dawson, longtime "Family Feud" host and actor, died Saturday night in Los Angeles. Readers responded to news of Dawson's death, fondly recalling his TV shows and acting roles, his penchant for kissing female guests on "Family Feud" and that show's famous phrase, "survey says." Several "Hogan's Heroes" fans jumped in to comment. What would be on your list?

Snowball12: "Survey SAYS!: Thanks for all the great years of entertainment. You had wit, swagger and charm, and we’re going to miss you. RIP, Richard and condolences to your family and friends."

ReallyJersey: "His salute on the cheek was appreciative while never crossing the line into salaciousness. This was a gentleman who knew how to do that politely, with class and flair. He wanted to be a nice guy you would feel comfortable sitting next to. ... He succeeded by making us feel like we were all invited to be part of playing a party game among our friends and neighbors. Bless you Richard, for making us laugh and smile. My sincere sympathy to his family and many friends."

"Hogan's Heroes," a sitcom set in a World War II German camp, left a particular mark on many readers. Some of the actors had served in the military, and some were Jewish and had fled Germany. Dawson portrayed Corp. Peter Newkirk, one of the Allied officers.

2nova: "Aw - Richard - you'll always be Newkirk to me. My brother liked 'Hogan's Heroes' when I was just little, so of course I watched it, too. Our parents, a WWII vet and a refugee of the Holocaust, always grumbled that it made the Nazis too likable and goofy, but even they had to smile at it. A different time. A time whose positive aspects you were representative of.  RIP, sweetheart."

One person said they had a personal connection to Dawson's family.

Mike Lano: "I spent much of the '70s growing up with his sons Mark and Gary. There was no greater professional talent on all levels from comedic to drama (don't forget his great "Outer Limits" lead star episode). A major animal lover/rescuer well before Betty White and Bob Barker, a W.C. Fields and comedy historian, a total guy's guy. This is a tremendous loss not just for the entertainment community, but for those of us privileged enough to have known him. He was absolutely brilliant on 'Laugh-In' and 'Match Game,' well before 'Feud.' Never once saw him nervous, even before his pilot tapings of 'Masquerade Party,' 'Feud,' etc. E-mailed Mark that we hoped he didn't suffer, and had no idea he was at UCLA for esophogeal cancer, as that had been kept private. The world is a sadder place today with his passing. Dr Mike Lano."

A few people assumed the "survey" format from "Family Feud" in their tributes.

Agonyflips: "Top 10 answers why Richard Dawson was so cool and what made him a great actor and the all-time best TV game-show host. ...  'Survey Says?' 2. He Was Actually Funny! Can anyone beat that?"

Daddyr: "1. He was sincere, a real person in a place where real people aren't a regular occurrence!"

Dawson's kisses certainly made an impression.

Dawson's ability to lampoon himself also won him fans.

Proletariat7: "I always remember him as that jerk of the game-show host Killian in 'The Running Man,' where contestants had to run up against a gauntlet of sadistic killers in miles of an earthquake-destroyed city block in the hopes of making it to the end. 'Killian look at your Subzero, now he's just plain zero after that assassin lost his head for the viewing audience.' - LOL"

Some preferred his time on "Match Game."

PatTar: "Absolutely 'Match Game.' I used to run home from high school to see it. I was in love with Richard Dawson. Frankly, I was such a Beatles fan that anyone with an English accent would do. Anyway, RIP, Richard."

One reader pointed out an eerie coincidence.

For others, Dawson was the ultimate "Family Feud" host.

SamIAm1066: "He's been missed for a while now ... even though the other ('Family Feud') hosts have been entertaining, I'll always associate the show with Mr. Dawson and his kisses to the ladies. 'Saturday Night Live' even spoofed him, and I loved him in 'Hogan's Heroes.' Thank you, Mr. Dawson for making my life just a little more enjoyable. ... That's what entertainment is all about, isn't it?"

Kuske: "Best 'Family Feud' host ever! I used to watch him when I skipped school and stayed home. Can't find him anymore. Today's hosts are horrible in comparison. ..."

RT @maggieNYT: He’s not even president anymore and they’ll still doing this.
susancandiotti

2:02 am ET May 9, 2021 RETWEET
RT @donie: Chinese rocket hurtling toward Earth and Elon Musk on SNL all in one night.
susancandiotti

1:06 am ET May 9, 2021 RETWEET
RT @JoshMankiewicz: “He talks about the recount constantly, asking for updates several times a day, and has become especially fixated on th…
susancandiotti