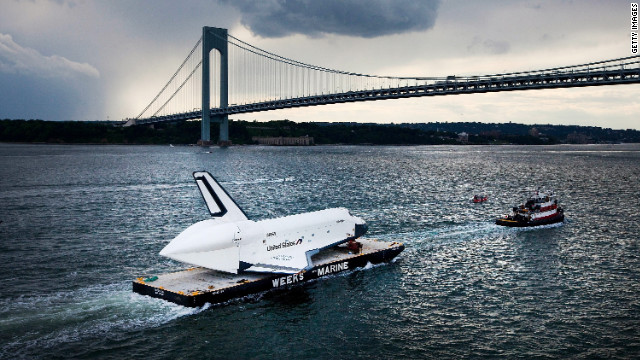 Space shuttle Enterprise is carried by barge underneath the Verrazano-Narrows Bridge on Sunday in New York City.
June 4th, 2012
06:00 AM ET

The space shuttle Enterprise took a journey more akin to those of the aircraft carrier USS Enterprise than its orbital sister ships on Sunday.

There, it will be transferred to another barge, this one with a crane. On Tuesday, the second barge will carry it back up the Hudson and lift the shuttle onto the deck of the USS Intrepid Museum, a former aircraft carrier and Enterprise's final destination.

The Enterprise was flown into JFK on the back of a 747 on April 27.