The man accused of stabbing author Salman Rushdie has been indicted by a grand jury. The suspect is expected at a 1â€twitter.com/i/web/status/1â€¦aB

The US accelerates its monkeypox response effort with 1.8 million more vaccine doses and other steps as demand growâ€twitter.com/i/web/status/1â€¦yc 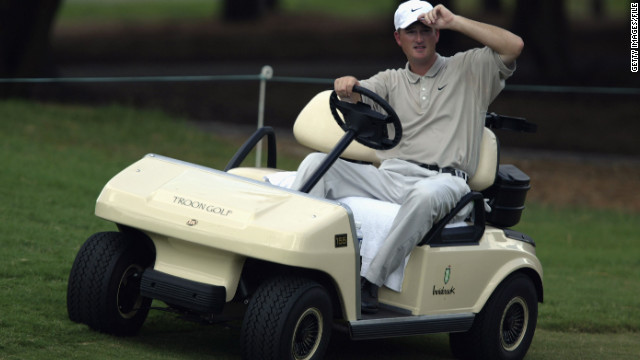 If you're a golfer aspiring to play in the nation's most prestigious golf championship, the U.S. Open, here's some tips to ensure you won't qualify:

- Take some time off from competition, say several years, before beginning the qualifying process.

- Then cut down on your practice time and hit just a few balls on the range before your final qualifier tournament.

- Concentrate on other things, such as coaching a collegiate golf team in the days leading up to the final qualifier.

Except if you're Casey Martin, a 40-year-old man with a right leg withered by a circulatory disorder who hasn't played in a pro tour event in nine years, that's just the way to go about getting into the U.S. Open.

Martin shot back-to-back 69s in two rounds Monday at the Emerald Valley Golf Club in Creswell, Oregon, to win a sectional qualifier for this month's U.S. Open at the Olympic Club in San Francisco, according to the U.S. Golf Association.

Martin has played in the U.S. Open at the Olympic Club before, in 1998, when he finished 23rd. But you probably remember him more for being a pro using a golf cart, an exception from the rules he was granted after a legal case that went all the way to the U.S. Supreme Court in 2001.

But he left tour golf behind years ago and has been the head golf coach at the University of Oregon since 2006, according to a report in The Oregonian.

He'd spent the previous week coaching one of Monday's runners-up, University of Oregon senior Daniel Miernicki, at the NCAA golf championships in Southern California, according to the media reports.

â€śI didnâ€™t prepare for this,â€ť he told The Register Guard. â€śI think maybe thatâ€™s the secret. I just had a couple of swing thoughts, and they worked well. It all seemed pretty simple. I didnâ€™t complicate things.â€ť

Martin did have one complication on Monday, George Schroeder writes in The Register Guard.

On the eighth hole of his second round, Martin seemed to have lost his ball on his tee shot. As he was about to head back to the tee after failing to find it, the ball turned up - under his parked golf cart. He ended up making birdie on a hole where a penalty stroke and double bogey loomed.

Can he carry that kind of peace in the U.S. Open?

"I wanna be excited, but I know when I get on that first tee, it's going to be really difficult," he told The Oregonian. "But I'm excited."

On August 17, 1982, the first CD pressed at a factory was ABBA's "The Visitors." Here's a look back at this new musâ€twitter.com/i/web/status/1â€¦Jb
cnni

4:11 pm ET August 18, 2022 RETWEET
2/2 HOWEVER, It depends on what a federal judge decides after he reviews suggested redactions by the Justice Dept.â€twitter.com/i/web/status/1â€¦n0
susancandiotti

On August 17, 1982, the first CD pressed at a factory was ABBA's "The Visitors." Here's a look back at this new musâ€twitter.com/i/web/status/1â€¦Jb
cnni

4:11 pm ET August 18, 2022 RETWEET
2/2 HOWEVER, It depends on what a federal judge decides after he reviews suggested redactions by the Justice Dept.â€twitter.com/i/web/status/1â€¦n0
susancandiotti

11:13 am ET August 18, 2022 RETWEET
The man accused of stabbing author Salman Rushdie has been indicted by a grand jury. The suspect is expected at a 1â€twitter.com/i/web/status/1â€¦aB
cnnbrk