[10:44 a.m. ET, 3:44 p.m. local time]: Becky Anderson is interviewing a woman who came from Australia to watch the festivities. She sums it up as Morgan did: "Fantastic."

[10:17 a.m. ET, 3:17 p.m. local time]: Watch the incredible moment when the Queen arrived at Buckingham Palace (she will appear on the balcony shortly):

[10:14 a.m. ET, 3:14 p.m. local time]: Discussions among the anchors and guests about the "nurturing, communicating" role of the Royals now, and how it has evolved. 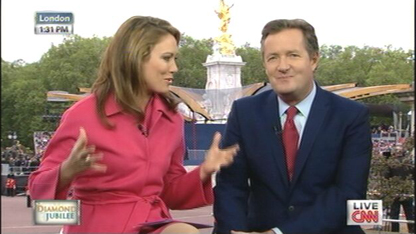 Piers and Brooke this morning.

[09:40 a.m. ET, 2:40 p.m. local time]: "These three days have been a triumph over the weather," says Sir David Frost. Rain is on the way, which is why the festivities have been sped up says Morgan.

[09:04 a.m. ET, 2:04 p.m. local time]: Buckingham Palace being shown now, where the famous balcony is empty for now. The procession has begun. "So much bigger in person," says Brooke Baldwin of the balcony. Piers Morgan calls it "the most famous balcony in the world."

[08:53 a.m. ET, 1:53 p.m. local time]: "These are the people...who will come up when they have the balcony wave," says Quest of the people in Trafalgar Square. Reminiscent of the balcony wave after the Royal Wedding last year.

[08:32 a.m. ET, 1:32 p.m. local time]: "The concert was great," says Morgan, but "I don't think Prince Philip would have missed that too much." The Queen's husband, Prince Philip, is recovering in the hospital today.