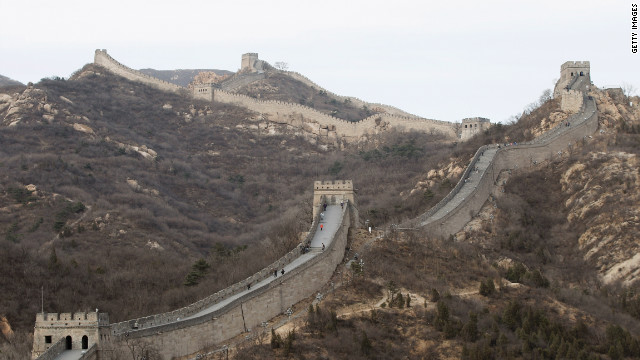 The length of the Great Wall of China - actually a non-contiguous series of defensive systems involving walls, natural barriers and trenches, built from 475 B.C. to 1644 in various areas to fend off invaders - was determined through surveys that began in 2007 at the direction of the State Administration of Cultural Heritage.

Teams then were instructed to identify and measure pre-Ming Dynasty wall systems throughout China. They found them to be 7,671 miles (12,345 kilometers) in length, said British researcher and author William Lindesay, who studies the Great Wall.

“The figure just announced (13,170 miles, or 21,196 kilometers) is a combination of the length of the Ming plus (the) length of pre-Ming Great Walls,” Lindesay wrote to CNN in an e-mail Wednesday.

The British Broadcasting Corp. reported in 2009 that before the initial survey results were announced, the wall’s length was commonly estimated at about 3,100 miles (5,000 kilometers).

The new survey report shows that many of the walls are in bad shape. In some sections, only the foundation remains; and only 8.2% of the walls from the Ming Dynasty are whole, according to Xinhua.

Activities such as mining and infrastructure development have damaged the walls, as have people who have taken soil or bricks from the structures, Xinhua reported, citing the report.

The report said that “the saving and preserving of the Great Wall’s relics should not be delayed,” according to Xinhua.

“These surveys are important groundwork in the protection of the walls, as first they need to be identified, location-recorded and measured,” Lindesay wrote in his e-mail to CNN.

Not all of the 13,170 miles represent actual walls. Among the 5,499 miles reported in the Ming Dynasty section in 2009, 223 miles were trenches and 1,387 miles were natural defensive barriers such as rivers or steep hills that were incorporated into the wall system, according to National Geographic.

The Great Wall of China was put on the UNESCO's World Heritage list in 1987.