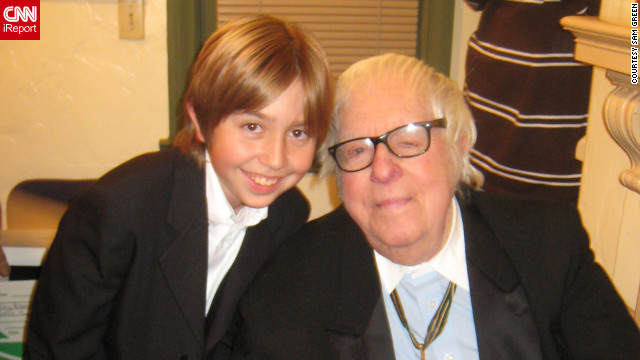 Overheard on CNN.com: Ray Bradbury was 'very down to Earth,' or maybe Mars

"Once you've read Bradbury, can you ever look at a tattoo the same way again?"
–Thinks2010

The death of Ray Bradbury brings to mind many great books, and here at CNN, a few memorable interviews. His characters set books alight in the dystopian "Fahrenheit 451," populated colonial Mars in "The Martian Chronicles" and danced on the tattooed markings of "The Illustrated Man." But there's more, too, and CNN iReporters and readers were eager to share their tributes to the famed, prolific author.

Film producer John Dayton of Los Angeles says he has worked with Bradbury on some projects. He has a photo showing him with his daughter Alexandra at Ray Bradbury's home last year.

"'Ray was my inspiration and surrogate father," Dayton said. "He taught me to latch onto my dreams, and blessed my life in general."

Chris Kacher of London says he counts Ray Bradbury as a friend. He sent along a photo that was taken in 2010, but he had been reading the author's work for awhile.

"Ray Bradbury talked about how he would write a few pages each day. At the time (back in the early 1990s), he said he only skipped this daily writing ritual twice - once for his wedding, and once when he was in hospital. In terms of sci-fi, his 'Fahrenheit 451' is a seminal work about what could be if we're not careful, akin to George Orwell's '1984.' Both works left a deep impression on my young, developing mind when I was a young teen."

Gene Beley of Stockton, California, sent along a photo of Ray Bradbury in 1968. He has taken many photos of the author over the years.

"Ray was MUCH more than a sci-fi writer, and this is almost an insult to him to ask this question," Beley said. "He was the most underrated writer in all mediums."

David Nitchman of Scarborough, Maine, talked about the breadth of Bradbury's work.

"The stories of Ray Bradbury were introduced to me by my father and our mutual love for those stories has been something we've shared for over 30 years. I think that Ray Bradbury's impact has been on so much more than sci-fi - so many of those stories are NOT science fiction, as they take place in an indeterminate time or often a future that is now ('The Murderer' is a perfect example of this). His themes of fear, and loss and the fantastic in ordinary objects, places and situations are most resonant with me."

"Even though he was wheelchair-bound and did most of his speaking through his biographer, he still was there to talk to his fans and share his wisdom. He was funny, sweet, open and honest. For someone at his age then, to go through the insanity circus that is Comic Con, shows just how deep his commitment and love to his fans was."

"He wrote with an uncynical voice, a difficult feat for sci-fi writers," Falcetti said. "He knew people, knew the good and the bad and was able to craft tales exploring those aspects. He brought space down to Earth and gave the world visions of what it could be, should be and can't be."

The most-liked story comment was from a reader who had seen Bradbury at a convention.

Vengeful: "I was at PAX (or maybe it was Comic-Con) and I was walking down the halls of the convention center when a hushed calm came over the attendees around me. The crowds parted ahead an elderly man as he was driven down the corridor in a wheelchair. 'It's Ray Bradbury' I heard people whisper. The entire corridor erupted in applause and the elderly man's face lit up as the admiration of several hundred of his fans washed over him. Just thinking about it still gives me goosebumps. It was as close to magical as I imagine I'll ever experience. He will be missed."

Sam Green of Burbank, California, says he and his son got to meet Ray Bradbury in August 2008. He describes the author as "very down to Earth (perhaps he'd prefer Mars)."

Indeed, several readers said they count themselves fortunate to have gotten to meet Bradbury.

firetalon78: "RIP Ray Bradbury at age 91. One of the science fiction authors out there I truly admired and got to know one day he visited the U of I Champaign giving a motivational speech around the Halloween of 1999, which I attended the night before. A very positive person despite the hardships he faced during his young adulthood. I saw him sitting outside our student union (Illini Union) by himself enjoying the morning air after coming out of my ECE 229 (Electromagnetics theory class). I decided to go up to him and chat one on one for awhile to learn a bit more about him and his future plans. Aside from future conventions and lectures, he planned to make the most of his life sharing what he has learned in his life. "

Jeffrey Dean Root of Orem, Utah, shared a photo of Venus' transit past the sun as part of his tribute to Ray Bradbury. He and many other readers thought it interesting that Bradbury's death coincided with this celestial event. He said he hopes for advanced space flight in the future.

"With the advent of private space flight and the success of SpaceX's first trip to the International Space Station, I see humans extensively exploring the solar system through manned flights within the next 100 years."

Rachel Humphrey-D'aigle says she grew up in Maine with a very strict religious upbringing and could only get some books at school, including Bradbury's. These books inspired her to think differently about the world. She later moved to Salt Lake City, Utah, and is now a writer, too.

"Many books and other media were banned for me at that time. If it hadn't been for my school library, I would never have had the opportunity to read books such as Bradbury's. I went on to enjoy many of his works and absolutely fell head over heels in love with sci-fi and fantasy. He had a style completely his own, something I think many of us aspiring authors struggle to find."

One reader said that "Fahrenheit 451," about a "fireman" who burns books instead of putting out fires, inspired them to go to bat for James Baldwin's "Go Tell It on the Mountain." The book's frank subject matter has been deemed controversial by some.

ms705: "R.I.P. sir. I remember the summer reading I had to do one year. 'Oh man ... reading ... over my summer break? What's this thing? 'Fahrenheit 451'? Oh, what's that about? Sounds weird!' Turned out to be one of the best summers because two years later when my school tried to ban a book ... I started a school rally."

Nothing like a good book, says this reader who counts science fiction as a big part of their life.

ReallyJersey: "This is a sad day for all devoted science fiction fans. I even met my spouse in the science fiction aisle of my local bookstore. One of my children just read 'Fahrenheit 451.' The poor kid was horrified to even think of a world without the pleasure of settling down comfortably to read a good book. Thank you Mr Bradbury, for sharing your literary talent with all of us. Bibliophiles around the world will miss you. My most sincere condolences to Ray's family and friends."

Marcelo Bulk Giminez of Bogota, Colombia, said he just wanted to pay a tribute to the beloved author who helped make his childhood a little better and inspired further readings.

"Although I do like to read, my main objective is the chance to dream, get ideas and put them intro practice. I think Ray Bradbury was an author with a very different style - his sci-fi and poetry was very appealing and motivated me to develop two sides of my life: the logical and intuitive sides."

For some, Bradbury's stories meant a glimpse at the possibilities.

nmgrrl: "The future is now. I always felt like the future would arrive only when Ray Bradbury was no longer here to dream it and write about it for us – he was such an incredible visionary and had such an expansive, creative mind. I'm truly awed by the scope of his intellect and range of his interests. I love his declaration that "I have looked in the mirror each day and found a happy person staring back." He defined success for me when he said this, and I work to make this the truth in my life. I can only hope to live as many days as Mr. Bradbury. He will be sorely missed, and my condolences to his survivors. Though his best friends may have predeceased him, he is still loved the world over, and there are so many who will rue the day upon which he died. May he rest in eternal peace."

iReporter Pamela Drapala of Yuma, Arizona, said she can't help but think forward in time. She remembers taking a walk with her friend and discussing the innovations that mankind has witnessed. She poses a few rhetorical questions in her iReport.

"I ask you to do the same, but this time think into the very distant future. What do you see as possibilities? Do you foresee computer robots who will be our prime caretakers when we are ill? Do you foresee computer robots who will do all of our manual labor? Do you foresee computers allowing us to fly across town instead of driving on congested streets? I see all of these things some day coming to fruition. Think of the limitless possibilities that await all of us. All we have to do is be patient, because it won’t be long before you too will see the impossible unfold right before your eyes. Embrace the new technology ... it’s here to stay."

What do you think about the future? How did Bradbury's work influence your life? Share your opinion in the comments area below and in the latest stories on CNN.com. Or sound off with your take via CNN iReport.