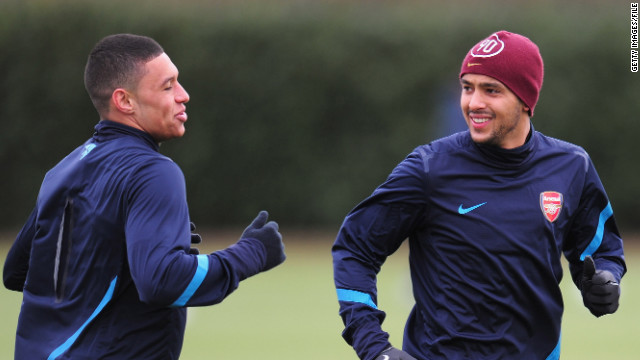 The families of England's Alex Oxlade-Chamberlain, left, and Theo Walcott will not be attending Euro 2012 for fear of racism.
June 7th, 2012
03:09 PM ET

Racism, rather than Ronaldo and Ribery, dominates Euro 2012 storylines

The UEFA European Football Championship is second only to the World Cup in size and prestige, and it's equally rich in storylines. But right now, one storyline seems to overwhelm all others.

The story today is not whether Portugal's Cristiano Ronaldo can shake his reputation as Europe's Lebron James, a man who wows fans all season only to choke in big games. Nor is the story about whether defending champion Spain can defend the title without two of its biggest stars. It's also not about how Franck Ribery and the French squad can rebound from an embarrassing, soap opera-esque campaign in the 2010 World Cup.

Heck, the media aren't even paying that much attention to German coach Joachim Low's promise to break world soccer protocol by allowing his team to smoke, drink booze and have sex during the tournament. That would normally be prime tabloid fodder.

Nope, the story today is about racism, especially within the stadiums of Poland and Ukraine, which are jointly hosting the Euro 2012 tournament beginning Friday. The day before the competition began, the Dutch national team opted to train on the opposite side of its training ground at Stadion Miejski in Warsaw because of racist chants, Dutch captain Mark van Bommel said Thursday.

And while a recent BBC investigation showed several instances of bigotry and racism at club games there - some of them violent - Polish and Ukrainian officials are insisting their countries have been misrepresented.

"There is a problem with racism and anti-Semitism in Poland, but it is blown out of every possible proportion in this material," Marcin Bosacki, Polish Foreign Ministry spokesman, said of the BBC documentary. "We are hospitable and treat all people who come here as friends."

Ukrainian Ambassador to the UK Volodymyr Khandogiy also defended his country, saying, "Ukraine is very well known for its tolerance and it has a long history of living together with other nationalities. In our national football championship, roughly half of all the players are from Asian, African and Brazilian countries."

Regardless, many players and former players are speaking out, and English police issued a warning to fans after the Ukrainian neo-Nazi group Donetsk Company threatened to attack black and Asian English supporters during the tournament, Sky Sports News reported.

The families of Theo Walcott and Alex Oxlade-Chamberlain, black English internationals who play for London's Arsenal, have said they will not attend the tournament because they fear becoming victims. Former English captain Sol Campbell, in the BBC documentary, warned his countrymen to stay out of the host countries.

"Stay at home. Watch it on TV. Don't even risk it because you could end up coming back in a coffin," he told a reporter.

Italian international Mario Balotelli threatened to walk off the field if he was the target of racism during the game. He had some pointed words for anyone who might hurl a banana at him - an expression of bigotry in Europe that has been all too common at soccer matches in the past.

“If someone throws a banana at me in the street, I will go to prison because I will kill him," he told Football France. "Racism is unacceptable to me, I cannot bear it. I hope there will not be a problem at the Euros because if it does happen, I would straight away leave the pitch and go home. ... We are in 2012. It can't happen.”

UEFA President Michel Platini responded by saying that any player who walks off the field during a game will get a yellow card (if a player receives two yellow cards in a game, he can be ejected). If a player is subjected to racial abuse, Platini said, he should report it to the referee who will have the authority to stop or even abandon the game.

"We will certainly support the referee if he decided to stop the game, but it's not a player, Mr. Balotelli, who's in charge of refereeing. It's the referee who takes these decisions," Platini said. "So, the referee has been given advice and he can stop the game if there are problems."

Anti-racism advocates say they appreciate UEFA's stance, and Piara Powar, executive director of Football Against Racism in Europe, told Reuters after Platini's news conference, "There is no question we are more worried about racism at this tournament than at any other and it is good to know that Mr. Platini understands what is going on."

The group will have 31 independent monitors - with two at each match - looking for evidence of racism, both obvious and nuanced, and will report any "right-wing banners and insignia, and discriminatory chants" they see or hear in the stands. They will also observe online fan networks prior to matches to determine if incidents are being planned, according to UEFA.

Fans will also be encouraged to help monitor behavior, as UEFA will have a dedicated hotline to report racism as well as an online form, both of which will be publicized outside of stadiums prior to matches, UEFA says.

"The UEFA system is three strikes and you are out," Powar told Reuters. "A fine, then another fine, then forcing teams to play behind closed doors. If the system is in full effect we could have a team kicked out of the competition for far right banners."

After the 2008 Euros, UEFA fined the Croatian national team almost $21,000 for racist banners and chants during their Turkey game.

While Platini has said he can't predict what will happen once you pack tens of thousands of fans into Polish and Ukrainian stadiums, he doesn't think either country presents an exceptional case of racism. It's more a microcosm of the bigotry around the globe, he said.

"I don't think there's any more racism in Poland and Ukraine than in France or anywhere else, or even in England," he said. "It's not a footballing problem. It's a problem for society but we will try our best to regulate the problem in our football."

There have definitely been instances of racism in soccer across Europe for years. John Terry, a defender for the English club, Chelsea, faces a racism trial for allegedly uttering a racist slur at Anton Ferdinand of Queens Park Rangers in October.

England is not alone. In the last six or seven years, black players in France, Russia, Germany, Spain, Slovakia, Sweden and Scotland have reported fans accosting them with monkey chants. Spanish club Real Madrid was fined in 2009 after its fans made fascist gestures and shouted slogans about "the gas chamber." In 2005, then-Spanish coach Luis Aragones was fined a day's wages after reporters heard him during practice refer to French superstar Thierry Henry as a "black s**t."

Several groups outside the governing bodies of FIFA and UEFA have taken up the cause of racism in football, including Henry's Stand Up Speak Up campaign. The result has been greater awareness and a stark drop in racist instances. Despite this season's Terry and Suarez incidents, Europe has come a long way since the days when fans unabashedly lifted banners in the stands taunting black players.

One hung in the stands by fans of the Italian club, Internazionale in Milan, targeted Ivory Coast and Messina defender Marc Zoro. It famously read, "Peanuts and bananas are the pay for your infamy." During an earlier match against Inter Milan, the abuse became so unbearable, Zoro picked up the ball and threatened to walk off the field.

Yet, even with the strides made in recent years, the controversial documentary that has been denounced by Polish and Ukrainian officials suggests that the headway made in western Europe has yet to make its way east.

In the BBC Panorama episode titled "Stadiums of Hate," reporter Chris Rogers attends club games in the host countries for a month. He encounters fans in Lodz, Poland, making monkey noises at black players and chanting, "Death, death to the Jewish whore." In Warsaw, Rogers stepped off the train to see "White Legion" spray-painted on a wall with a white-power symbol, the Celtic cross, planted between the two words.

In Rzeszow, Poland, a fan held aloft a sign saying, "Death to the Hooked Noses," another shot at Jewish people. In Krakow, fans wore anti-Semitic shirts and attacked police when they couldn't get at opposing fans through a Plexiglas barrier that had been erected in the stadium.

Things seemed just as bad, if not worse, in Ukraine. There were more monkey chants in Kiev, and in Kharkiv, Rogers stunningly found hundreds of men, women and children throwing their hands up in an apparent Nazi salute and chanting, "Sieg heil!" A common greeting in Adolf Hitler's Germany, it means, "Hail, Victory!"

Of the gesture, Volodymyr Kovrygin of the Kharkiv police told Rogers there was no racism at the game and that home fans were merely pointing at the opposing team's supporters.

One of the documentary's most disturbing scenes also came at Kharkiv when home team fans surrounded several Indian students sitting in the stadium's family section and brutally attacked them. The Indians were rooting for the same team as their attackers.

Despite these seemingly indisputable images, the documentary is not without its detractors. Bosacki of the Polish Foreign Ministry called the episode "cheap journalism," while Khandogiy, the Ukrainian ambassador, called it "unbalanced and biased reporting."

"Racism and racial ideology is against the law, and if those young fans were shouting anything close to Nazi slogans they would have been prosecuted," Khandogiy said.

Even one of the documentary's sources - the American-born Jonathan Ornstein, who heads the Jewish Community Center of Krakow - has come forward to say the BBC "exploited" him as a source.

In a statement to The Economist, he wrote, "The organization used me and others to manipulate the serious subject of anti-Semitism for its own sensationalist agenda; in doing so, the BBC has insulted all Polish people and done a disservice to the growing, thriving Jewish community of Poland."

Powar, who heads Football Against Racism in Europe, had a different take: "I think we know the situation in domestic football in both Poland and Ukraine, and I'm afraid the documentary hit the nail on the head - it's a very bad situation,"

He went on to praise the efforts of those working to tamp down bigotry ahead of one of the world's most anticipated sporting events.

"There is some good work going at grass roots level to make sure that Euro 2012 inside stadiums does not resemble the sort of scenes we saw in the documentary," Powar said.