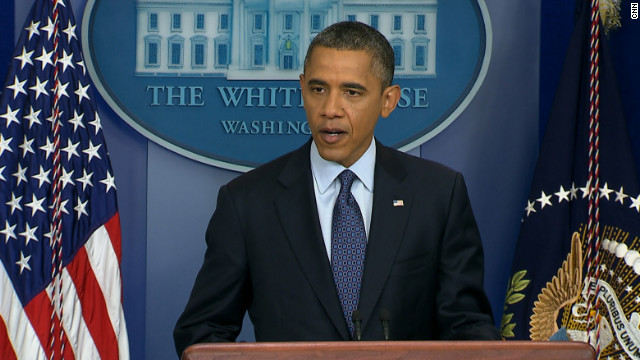 [Updated at 11:17 a.m. ET]  The United States will conduct "thorough investigations" into leaks of classfied information, President Barack Obama said Friday in his first public comments on the controversy since several members of Congress called for an independent counsel to investigate.

"The notion that my White House would purposely release classified national security information is offensive," Obama said. "It's wrong, and people ... need to have a better sense of how I approach this office and how people (around me) approach this office."

The controversy involves, among other things, last week's report in The New York Times that provided classified details of what it described as a U.S cyberattack targeting Iran's nuclear centrifuge program.

Some Republicans, led by Sen. John McCain of Arizona, alleged that the White House must be knowingly involved because of the nature of the leaked information. The White House rejects the accusations. The FBI and the U.S. attorney in Washington are investigating, federal lawmakers have told reporters.

Obama's comments in the White House press briefing room came after he made a statement on the economy, in which he called on Congress to pass all parts of his 2011 jobs plan to counter European economic troubles, which he says threatens a U.S. economic recovery (see below).

[Updated at 10:56 a.m. ET]  President Barack Obama said Congress should adopt all parts of his jobs plan - which he introduced last year - to help counter economic "headwinds" from Europe that he says is holding back a U.S. economic recovery.

He said he appreciated the fact that Congress passed on part of his plan - a payroll tax cut extension. But he called for the passage of the other parts, including bills that would help people refinance their mortgages and give businesses tax breaks for hiring more workers.

Obama’s remarks come a week after a jobs report showed U.S. unemployment in May rose from 8.1% to 8.2%, and that only 69,000 jobs were added last month - the weakest growth in a year.

Obama said the good news is that European leaders know that "there is a path out of this challenge," including taking actions that would promote economic growth and job creation. He also urged Greece, which is facing a debt crisis, to remain in the euro zone.

Investors around the world have been concerned about Europe's financial difficulties, including fears that Spain, which is in recession, will need to be bailed out by other European nations, and uncertainties about whether Greece will be forced to drop the euro, according to CNNMoney. On Thursday, credit rating agency Fitch downgraded Spain's sovereign debt rating.

The decisions that are required to turn around Europe's finances "are tough, but Europe has the capacity to make them, and they have America’s support," Obama said.

If Europe as a whole goes into recession, that means fewer goods and services that the United States can sell to Europe, Obama said.

"And that is going to have some impact on our recovery," Obama said.

[Updated at 10:37 a.m. ET] U.S. President Barack Obama will deliver a statement about the economy Friday morning, the White House has said.

Obama will urge Congress to pass proposals "to put construction workers back to work upgrading our roads and bridges, teachers back in the classroom educating our kids and police and firefighters back on the job keeping our communities safe," according to the White House.

Obama’s remarks come a week after a jobs report showed U.S. unemployment in May rose from 8.1% to 8.2%, and that only 69,000 jobs were added last month - the weakest growth in a year.