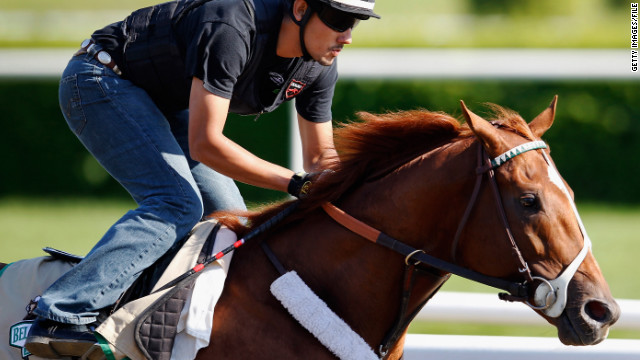 I'll Have Another won the Kentucky Derby and the Preakness, but won't be attending the Belmont.
June 8th, 2012
03:32 PM ET

Overheard on CNN.com: If wishes were horses, 'Another' Secretariat would rise

Readers' hopes of witnessing the first Triple Crown winner in 34 years sank when the news broke that I'll Have Another was scratched from Saturday's Belmont Stakes. We're seeing all kinds of conversation about this horse, and the high-stakes racing world.

'I'll Have Another' scratched from Belmont

Do horses care about winning? Readers started to reminisce about the champion horse Secretariat, which inspired a movie starring Diane Lane.

Chicago7: "I disagree with the sentiment that the horse couldn't care less. I think champion racehorses know very well that they're special when they're running. How could anyone doubt that while watching Secretariat shut out the competition at the lengthy Belmont Stakes, pass the finish line and then just keep running at full tilt ... and running ... and running ... and running. He knew all eyes were on him, that everyone was breathless, and that he was doing something extraordinary, and didn't want it to end. I'd call that horse a machine except he had too much heart to reduce him to that. I'm hoping for another Secretariat someday although I know there'll never be another horse like him. I was rooting hard for Smarty Jones and was so sad when he didn't win the Belmont. I feel just like that now – I'll Have Another reminded me of him a lot."

Mwolve: "I don't know about the feeling of having eyes on him, though dogs are definitely known to find joy in performing for their owners and sometimes one up each other, but it is obvious that some horses love to run and run fast. It is not a stretch to think some horses like to out run others. That being said, Secretariat was a bit of a machine. He literally had a lot of heart. He was physically much more gifted, including having a larger heart (literal organ), than any other horse he faced."

Some were hoping to witness a historic moment.

Big mark: "Last triple crown winner was the year of my birth. Had hoped to actually watch it happen."

A few readers said they think it's a smart move to pull the horse out.

Hope: "Probably a smart decision on the part of the trainer and the owner. I'll Have Another's health (legs) are more important than a win. I wish there were more responsible people like them in the horse racing industry! Hats off to a true champion, Hope"

Snappy53: "I wholeheartedly agree with your statement Hope. Best of luck to IHA in the future. He is still a champion in my eyes. He'll have fun at the breeding shed from now on. The trainer made the right call. We would not want another tragedy like poor Barbaro to happen during the Belmont."

This commenter, who said they work with horses, was appreciative.

phyllis chatterton: "At last an owner who cares about his animal. Thanks for your thinking of your horse and not your pockets. This 7th generation horseman loves you. ponylady"

Could concerns about horse breeding be involved? Some of the allegations that have surrounded trainer Doug O'Neill in the past led a few readers to question his motives.

responsible?: "Responsible, racing industry and O'Neill don't belong in the same sentence. (The horse's genes) are worth far more than anything else. If he catastrophically broke down on the track, the owners wouldn't be able to sell his love for $1,000,000/breeding. Racing isn't about ethics, it's about money."

bluemalak: "He'll make them plenty of money just in stud fees for winning the Derby and the Preakness."

Others said they think horse racing is no good.

The Buzzman: "Good. Horseracing should just be abolished all together. Theres nothing good to it at all. Its all about money hungry people betting on animals. How is this different then any other animal related betting? Oh yeah its still legal, that all. Get rid of this. The animals are who suffers out of this and they get pushed too hard and then what they break a leg and then they have to put them down. Thats wonderful!"

This person had fun with the horse's name.

But there are other horse races.

Trace: "Ratings for the race just dropped by 60%"

writergal: "Unfortunately, the real loser in this is whatever network is showing the Belmont. With I'll Have Another out, it's just another horse race and it doesn't matter who wins. Viewership will likely be maybe a quarter of what it would have been if people thought they were going to see a possible Triple Crown winner."

What's at stake now? Share your opinion in the comments area below and in the latest stories on CNN.com. Or sound off on video via CNN iReport.