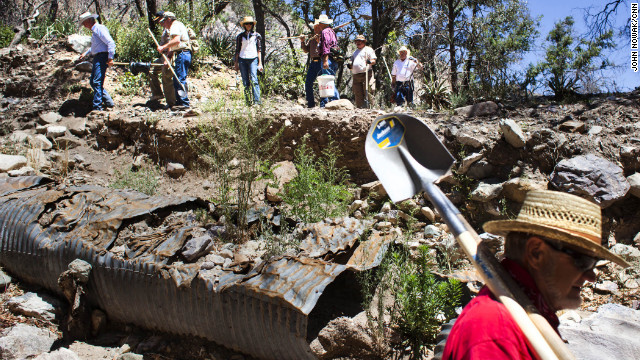 Tombstone, Arizona (CNN) – Under an unforgiving desert sun, about 60 determined souls gathered in a high school football field under the banner of the Tombstone Shovel Brigade. They collected shovels and joined a pickup truck caravan across the desert. Then they climbed two miles up a steep, rocky canyon and began to move part of a mountain, one boulder at a time.

Thousands of miles away, in the nation’s capital, Tombstone’s congressman and the city archivist tried to move a bureaucratic mountain, too, during hearings before a subcommittee of the House Natural Resources Committee.

Tombstone, as CNN has reported, is in the midst of a court battle with the U.S. Forest Service. At issue is whether Tombstone can take heavy equipment into federally protected wilderness.

Tombstone is trying to repair a 26-mile pipeline that has brought mountain spring water into the city since 1881. The pipeline was damaged during last summer’s Monument Fire and floods that brought mud and boulders crashing down the denuded mountainside.

The city sued the Forest Service in December, accusing the agency of dragging its feet during a state of emergency. The courts have turned down the city’s request for an emergency injunction, and so the battle has entered a new phase in the court of public opinion.

Frustrated with the slow pace of the repairs, Tombstone’s supporters created the nonprofit Tombstone Shovel Brigade a couple of months ago. They are helped by the organizers of the Jarbidge Shovel Brigade, which used volunteer muscle power to move a boulder and reopen a mountain road on federal wilderness in 2000.

Tombstone has become the poster city for a sweeping resurgence of the Sagebrush Rebellion in some Western states. This time, Utah state Rep. Ken Ivory explained, the rebellion is not fueled by oilmen and cattle ranchers.

Instead, local governments are behind the movement to push back against what they say is the federal government’s treatment of them as “submissive subdivisions.”

U.S. Rep. Jeff Flake has introduced H.R. 5971, the Emergency Water Supply Restoration Act, which proposes to set aside Forest Service restrictions against the use of construction equipment during state-declared water emergencies. Flake and Nancy Sosa, the city’s archivist, were among the witnesses who testified Friday.

“The unforeseen consequences of federal laws and regulations threaten to do something outlaws, economic busts, and the Arizona desert couldn’t: Kill the town too tough to die,” Flake said. Tombstone, population 1,400, is a throwback to the Old West and is famous for the 30-second gunfight at the O.K. Corral, which is re-enacted for tourists twice a day.

“Without water, the most precious commodity in the desert, Tombstone will cease to exist,” Sosa said. She told the committee that Tombstone burned to the ground twice before the waterline was built.

CNN will have more on this developing story Saturday.