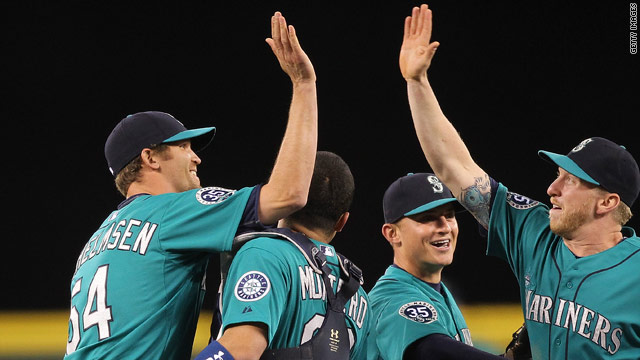 Pitcher Tom Wilhelmsen (left) celebrates with his teammates after the Seattle Mariners throw a combined no-hitter against the L.A. Dodgers.
June 9th, 2012
01:30 AM ET

Six pitchers from the Seattle Mariners combined to throw a no-hitter against the Los Angeles Dodgers on Friday, the 10th combined no-hitter in MLB history.

Third baseman Kyle Seager had a RBI single, scoring Ichiro Suzuki from second base in the Mariners' 1-0 victory.

It is the fourth no-hitter of the baseball season so far, following Jered Weaver of the Los Angeles Angels of Anaheim, Johan Santana of the New York Mets and Philip Humber of the Chicago White Sox.