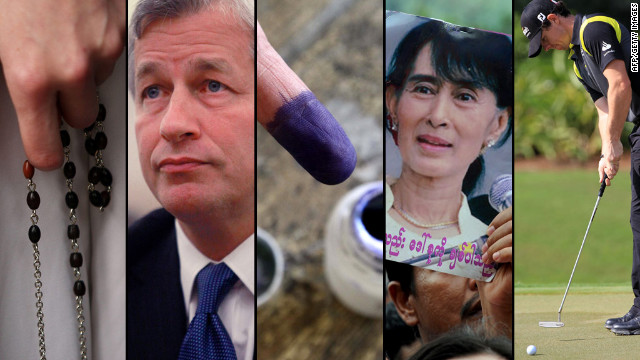 Leaders from the United States' largest group of Catholic nuns will head to the Vatican on Tuesday to address accusations that it strayed from church doctrine, according to CNN's Jim Roope.

An April report from the Congregation for the Doctrine of the Faith, the Catholic Church's watchdog on doctrine, said the Leadership Conference of Women Religious had allowed "radical feminism" to be espoused at their conferences unchecked.

The doctrinal assessment praised the sisters' work on social justice issues but said they were not doing enough on abortion, same-sex marriage and euthanasia. The Vatican report also was critical of the nuns because of their support for the United States' Affordable Care Act, which will require private health plans to cover artificial birth control, the use of which is against Catholic teaching.

The cardinal who heads the Congregation for the Doctrine of the Faith said he hopes the meeting in Rome will let the two sides "review the document together in a spirit of mutual respect and collaboration, hopefully thereby avoiding possible misunderstandings of the (assessment's) intent and scope."

JP Morgan CEO to testify on billions in losses

The CEO of JPMorgan Chase is scheduled to testify before the Senate Banking Committee this week about the bank's billions of dollars in trading losses that it reported last month.

Jamie Dimon is scheduled to testify Wednesday. The bank originally reported a $2 billion trading loss on May 10, but since then estimates of the size of the loss have risen, and some believe the losses could reach $6 billion to $7 billion, CNNMoney reported.

The news of the loss has renewed debate on Capitol Hill about financial reforms designed to stop big risky bets that could hurt the financial system.Â After JPMorgan disclosed the loss, the FBI and the Securities and Exchange Commission opened preliminary investigations looking into the matter. END_OF_DOCUMENT_TOKEN_TO_BE_REPLACED

Fifteen months into the Syrian crisis and with no end in sight, a prominent opposition body has electedÂ Kurdish activist Abdul Baset Sieda as its new president in what could reinvigorate a political arm of the uprising.

Dozens of countries have recognized the SNC as a legitimate representative of the Syrian opposition, though many members of the group's leadership are expatriates.

But Syrian President Bashar al-Assad - who has received global disdain for lethally cracking down on dissidents seeking his ouster - has said he will not deal with opposition members influenced from the outside.

According to the LCC, random shelling tormented the Homs neighborhood of Talbiseh early Sunday, pausing every four minutes only to continue with artillery and mortars.

Former Democratic Congresswoman Gabrielle Giffords made a rare appearance before a cheering crowdÂ  of supporters at a "get out the vote" concert in downtown Tucson.

Giffords was joined by her husband, Mark Kelly, at the Saturday event for a special election race for the seat from which she resigned.

The standing-room only crowd gathered at a theater cheered as she walked on stage with her husband, who spoke on her behalf.

"It was incredibly hard for her to resign," Kelly said as Giffords smiled and held hands with her former aide Ron Barber. "And the person she knew could represent this district like she did is standing to my right."

A raging wildfire that swelled within a day to 8,000 acres in northern Colorado, burning structures and forcing evacuations, will likely grow Sunday, fire officials said.

Firefighters battled the blaze, dubbed the High Park fire, that has been fanned by high temperatures and dry brush since it began Saturday morning 15 miles west of Fort Collins, according to InciWeb, the U.S. multi-agency Incident Fire Response website.

Compounding the problem is a shortage of resources, said Larimer County Sheriff Justin Smith. He said a lot of regional resources are already deployed fighting other outbreaks, such as the Whitewater Baldy fire in New Mexico.

A man identifying himself as leader of the West Virginia Oath Keepers said he recorded Oath Keepers in a November 2â€twitter.com/i/web/status/1â€¦Td
sarasidnerCNN

4:01 pm ET October 6, 2022 RETWEET
The testimony today in the #SeditiousConspiracyTrial is a lot: 3 men who said they were Oath Keepers in 2020 1 saiâ€twitter.com/i/web/status/1â€¦HD
sarasidnerCNN

A man identifying himself as leader of the West Virginia Oath Keepers said he recorded Oath Keepers in a November 2â€twitter.com/i/web/status/1â€¦Td
sarasidnerCNN

4:01 pm ET October 6, 2022 RETWEET
The testimony today in the #SeditiousConspiracyTrial is a lot: 3 men who said they were Oath Keepers in 2020 1 saiâ€twitter.com/i/web/status/1â€¦HD
sarasidnerCNN

A top Proud Boys lieutenant becomes the first member of the extremist far-right group to plead guilty to seditiousâ€twitter.com/i/web/status/1â€¦hi
cnnbrk