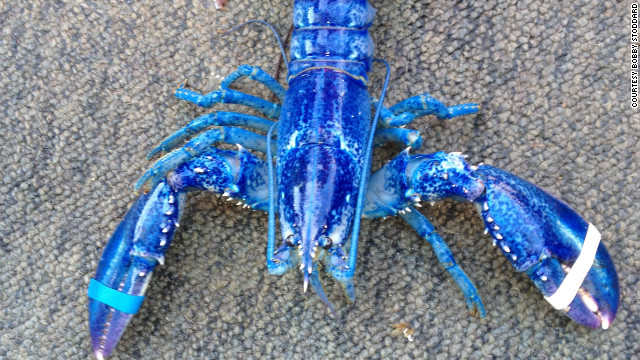 Canadian lobsterman Bobby Stoddard caught this rare blue lobster in early May. He's not sure what to do with it.
June 11th, 2012
09:46 PM ET

A catch straight out of the deep blue sea

A rare event is said to happen once in a blue moon. But a blue moon has nothing on a blue lobster.

Canadian lobster boat captain Bobby Stoddard said he and his crew were hauling in their lobster traps one day in early May when one of the men called out, "Hey, we got a pretty one in this trap!"

In the trap with three other, ordinary greenish-brown lobsters was a remarkably bright blue one, the first lobster of that hue Stoddard had seen in his 33 years of fishing for a living.

"This is the only one that I've ever seen," he told CNN. "And my dad has been a lobsterman of about 55 years, and he caught one about 45 years ago, but hadn't seen one since."

Stoddard captains one lobster boat, his father another, and his three brothers work with them. On a good day, they haul in about 3,000 of the crustaceans, he said. Multiply that times 33 seasons, and that's a lot of lobsters. But only one blue one.

According to the University of Maine Lobster Institute, blue lobsters are a one-in-2-million phenomenon. A genetic variation causes the lobster to produce an excessive amount of a particular protein that gives it that azure aspect.

Stoddard offered his find (a male, by the way) to a nearby ocean research institute, but "they didn't seem too interested," he said.

His girlfriend pushed him to offer it for sale for on the classified-ad site Kajiji.com, he said. Having no idea what the market for a 1.5-pound blue lobster might be, he priced it at $200.

"I wanted to put a number high enough on it so nobody would be interested in it," Stoddard confessed.

However, he said he started to get some "weird" phone calls and e-mails scolding him for trying to sell such a rare creature, so he canceled the ad.

"I'm kind of a shy guy," he said. "When things get controversial, I kind of go hide. This is what I do for a living; I catch lobsters and sell them. I'm just trying to do the right thing. I thought, 'I just don't need this hassle.' "

For now, the cerulean crustacean is residing comfortably in a nice, cold holding tank at Stoddard's business, feeding on bits of fish and mollusks as normal. A massive aquarium is under construction near the CN Tower in Toronto, but Stoddard hasn't decided whether to offer his specimen for display there.

"I don't know what the best thing is to do," he said. "It probably belongs back in the ocean, but I'd like for as many people as possible to see it."

Blue lobsters aren't the only rare ones - what about calico lobsters?

And then of course, there are always really, really big lobsters as well.

When cars brake or accelerate, they emit 'tire dust' -- it's the second-largest source of microplastics in the oceaâ€twitter.com/i/web/status/1â€¦fQ
cnni

5:45 am ET August 17, 2022 RETWEET
The 911 call starts with a jarring observation: â€śA car just went through my neighborâ€™s houscnn.it/3PuHCMxdW4UmI
cnni

When cars brake or accelerate, they emit 'tire dust' -- it's the second-largest source of microplastics in the oceaâ€twitter.com/i/web/status/1â€¦fQ
cnni

5:45 am ET August 17, 2022 RETWEET
The 911 call starts with a jarring observation: â€śA car just went through my neighborâ€™s houscnn.it/3PuHCMxdW4UmI
cnni