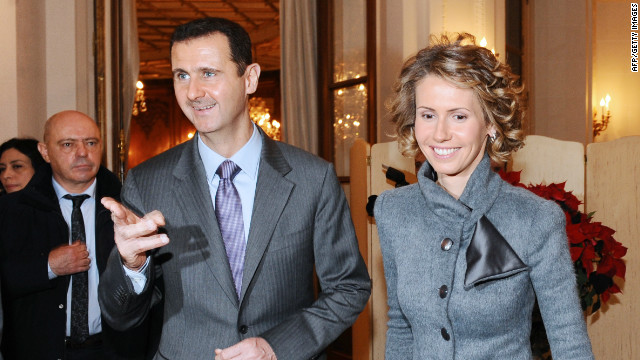 Syrian President Bashar al-Assad's wife, Asma, has not been heard from since the violence began.
June 12th, 2012
11:45 AM ET

More than a year after Vogue magazine published a gushing profile about the first lady of Syria, the magazine's editor in chief has released a statement condemning the regime of Bashar al-Assad.

A statement from Anna Wintour appeared Monday on Vogue.com.

"In 2010, we set up an interview with the Syrian leader's wife, Asma al-Assad, a Western-educated former banker and a woman with a reputation as a force for reform in the Middle East. Like many at that time, we were hopeful that the Assad regime would be open to a more progressive society. Subsequent to our interview, as the terrible events of the past year and a half unfolded in Syria, it became clear that its priorities and values were completely at odds with those of Vogue. The escalating atrocities in Syria are unconscionable, and we deplore the actions of the Assad regime in the strongest possible terms."

The profile of Asma al-Assad appeared in the print March 2011 version. Vogue apparently removed the story from its website later.

The piece called Asma al-Assad a "rose in the desert" and described her as "the freshest and most magnetic of first ladies." The British-born first lady was portrayed in the story as a progressive and modern woman who fought for the rights of children, the poor and those who are oppressed. Read CNN's story on Asma al-Assad and the Syrian uprising here.

In March, the EU imposed new sanctions on Asma al-Assad.

In April, wives of top U.N. diplomats urged Asma al-Assad to speak out.

The Vogue story came out as the al-Assad regime was cracking down violently on an uprising in the country. The United Nations estimates that more than 10,000 people, mostly civilians, have died since the crisis erupted in March 2011. Opposition groups give estimates ranging from at least 12,000 to more than 14,000. Human Rights Watch reports that at least 1,176 children have been killed since February 2011.

In April, wives of top U.N. diplomats banded together to publicly call for Asma al-Assad to do something to stop the bloodshed in Syria.

The first lady has not been heard from since the violence began.

CNNŌĆÖ@camanpourur remembers the legendary Larry King: ŌĆ£He was the ultimate master of the interviewtwitter.com/i/web/status/1ŌĆ”n1SfnICT
cnni

4:31 pm ET January 23, 2021 RETWEET
President Biden is caught in an almost impossible vise as the nation reengages in the most polarizing kind of proceŌĆtwitter.com/i/web/status/1ŌĆ”8w
cnni

4:15 pm ET January 23, 2021 RETWEET
As horrible as the pandemic has been for small business owners, for some it has also shown in spades the compassionŌĆtwitter.com/i/web/status/1ŌĆ”fL
cnni

4:00 pm ET January 23, 2021 RETWEET
Third-party sellers on Amazon and other e-commerce sites are sending random products to people across the US as parŌĆtwitter.com/i/web/status/1ŌĆ”sd
cnni

3:31 pm ET January 23, 2021 RETWEET
The UK's decision to wait up to 12 weeks before giving people their second dose of the Pfizer/BioNTech coronavirusŌĆtwitter.com/i/web/status/1ŌĆ”Yi
cnni