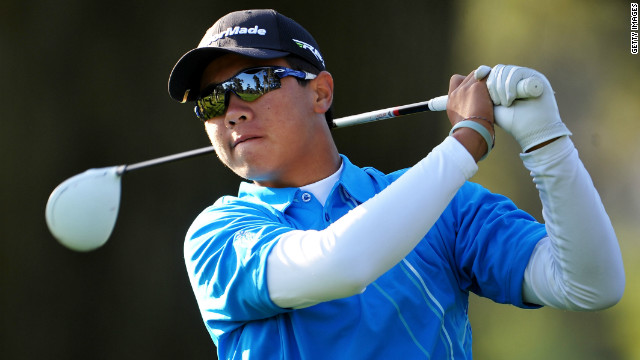 A 14-year-old from China will become the youngest golfer ever to play in the U.S. Open when he tees it up at The Olympic Club in San Francisco on Thursday.

Andy Zhang got a spot in the 156-player field when England's Paul Casey withdrew on Monday with a shoulder injury, the USGA announced.

"I will just try to enjoy it as much as possible," Golf Digest quoted the teen as saying. "I want to play well, but just to play on a major championship course is great."

Zhang plays out of the IMG Academy sports school in Bradenton, Florida. He won't turn 15 until December 14. The previous youngest player in the 112 playings of the U.S. Open was Tadd Fujikawa, who was 15 years, 5 months old when he played in the 2006 tournament.

Zhang was the second alternate to get into this year's Open. Another teen, 18-year-old Jordan Spieth of Dallas, Texas, got in when Brandt Snedeker withdrew because of an injury.

Zhang becomes the eighth amateur and second high school student in the field. Beau Hossler, 17, of Rancho Santa Margarita, California, is the other. He'll be playing in his second consecutive U.S. Open.

Now that he's officially in the tournament, Zhang will play a practice round Tuesday morning with the winner of this year's first major tournament, Masters' champ Bubba Watson, according to GolfWeek.

For the event's first round on Thursday, Zhang will play with Japan's Hiroyuki Fujita and American Mark Wilson.

12:26 pm ET January 26, 2022 RETWEET
Confidence is growing that a winter storm with the intensity of a hurricane, snow measured in feet and blizzard-likâ€twitter.com/i/web/status/1â€¦78
CNNweather

12:17 pm ET January 26, 2022 RETWEET
The Beijing Games will be the first Winter Olympics to use virtually 100% artificial snow by deploying more than 10â€twitter.com/i/web/status/1â€¦Ex
CNNweather

7:59 am ET January 26, 2022 RETWEET
The eruption this month of an underwater volcano near Tonga was hundreds of times more powerful than the Hiroshimaâ€twitter.com/i/web/status/1â€¦RL
CNNweather