New York City is set to run out of Covid-19 vaccines by Thursday if the state doesn't receive more doses, Mayor BilŌĆtwitter.com/i/web/status/1ŌĆ”i6 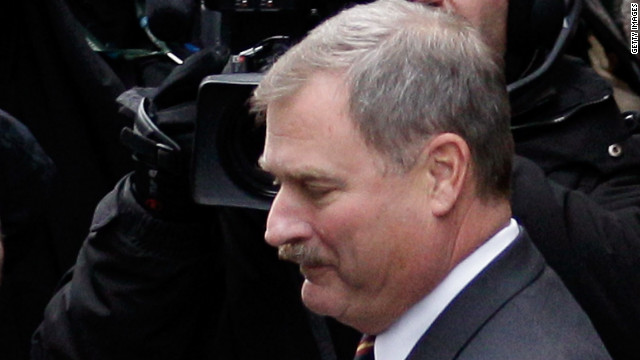 High-ranking officials at Penn State are accused of giving inconsistent testimony to a grand jury as well as not turning over a secret file containing allegations that Jerry Sandusky was acting inappropriately, according to court documents obtained by CNN.

"The file was created, maintained and possessed by Gary Schultz," according to the document.

Penn State's former vice president for finance and business, Gary Schultz, who also oversaw the college's police department,┬Āand former Athletic Director Tim Curley face charges including perjury and failure to report abuse in the scandal. The court documents say the file contains information that is inconsistent with Schultz's and Curley's previous statements to grand jury regarding the Sandusky case.

"The commonwealth has come into possession of computer data (again, subpoenaed long ago but not received from PSU until after the charges had been filed in this case) in the form of e-mails between Schultz, Curley and others that contradict their testimony before the Grand Jury,ŌĆØ the document states.

CNN's Susan Candiotti reports that the documents bring up questions about what school officials knew about allegations against Sandusky, when they knew it and what they told authorities during their investigation.

The details emerged on the second day of Sandusky's trial, when the the alleged victim whose allegations triggered the criminal investigation is expected to take the stand.┬ĀHe is one of 10 boys who, prosecutors say, were sexually abused by the Nittany Lions' longtime defensive coordinator over a span of 15 years. Sandusky's trial on 52 charges is expected to continue for about three weeks.

­¤ō® Sign up to get the facts on coronavirus delivered to your inbox dailcnn.it/38ZdczUf2z Here's everythintwitter.com/i/web/status/1ŌĆ”iMpQl
cnni

10:44 am ET January 19, 2021 RETWEET
While a lot of attention has been paid to President Donald Trump's words, there's been less focus on the fiery rhetŌĆtwitter.com/i/web/status/1ŌĆ”CQ
cnni

10:31 am ET January 19, 2021 RETWEET
"As US President Donald Trump hands power to Joe Biden on Wednesday -- however reluctantly -- he also hands his sucŌĆtwitter.com/i/web/status/1ŌĆ”sA
cnni

10:00 am ET January 19, 2021 RETWEET
A 16th-century copy of Leonardo da Vinci's "Salvator Mundi," the world's most expensive painting, has been recovereŌĆtwitter.com/i/web/status/1ŌĆ”sr
cnni