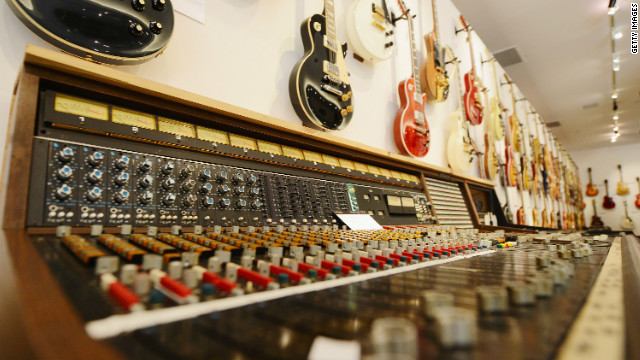 Music is an emotional connection for people. For the people who love it, their favorite songs, bands and artists weave a soundtrack for life, changing to suit growing pains and shifting moods. When one of our writers, Jareen Imam, detailed the shifting ways that people access their music, the emotions of music listeners climbed higher.

By interviewing college-age music fans, Imam discovered that an increasing number of that demographic opts to stream music instead of buy it. They stream music by using online services like Pandora, Spotify, 8tracks and The Hype Machine. Purchasing actual albums in stores or dropping $1.29 for a new single on iTunes? Not so popular with them, because it amounts to 'a lot of work.'

Young listeners opting to stream, not own music

CNN.com's readers immediately took to the comments. The debate tugged back and forth between advocates of streaming vs. downloading or buying their favorite tunes. Many wondered whether streaming is the best way to show your favorite musicians that you care. Or is a download or album purchase the best way?

But then, strains of other, and perhaps older, arguments began over the quality of music today, if artists should just focus on making money on concerts rather than albums and even if people should buy only albums or only singles. Others simply referred those against streaming to another form that has been around for a while: the radio.

For the people streaming music, they were also open to other ways of getting their music fix.

25700_Reg: I just got into st[r]eaming with Pandora. I use it on long rides, but I don't like that I can't control what plays next. Well maybe I don't know how as of yet. I let my son use my iPhone to listen while he was visiting and the next time I went to hook up, it kept playing his kind of raunchy rap crap. I hate it!

Serge Cruz Jr.: Great article... To me it's pretty simple, experience LIVE music whenever possible, own what you LOVE & stream everything else...

einZuschauer: I think people are seeking personalization and customization.  If streaming suits their needs that is great but there is no guarantee that the music will always be available.  Personally, I like having multiple options to find the music that fits my mood, but I always end up purchasing my favorite music.

Some commenters addressed the technical downfalls to streaming.

Phantomcolonel: Spotify is actually NOT free if you're using it on the phone, you need a subscription that costs $10 a month, which is VERY expensive IMHO. Pandora is great at picking songs similar to what you like, but it doesn't let you pick the exact song you want to listen to, which is sometimes quite annoying. YouTube has a big collection of songs, but the YouTube app only plays one song at a time and stops after every song.

Recently I found a new iPhone app called MixerBox, which basically turns YouTube into a non-stop music player. It doesn't require a monthly subscription fee on the iPhone, lets me pick the exact songs I want from YouTube, and it plays them non-stop so I don't have to keep picking the next song. 🙂

It's free today if anyone wants to download it, it's a great app that's not very well known yet. Just search for "mixerbox" in the App Store.

Nebula77: It's all about the quality of the music....streamed music is very inferior to a blazing stereo with vinyl on the needle

A trending conversation in the comments reminded that people thought the recording industry and album sales would die off entirely when music downloads became available. One user suggested that downloading music would continue, even in an age of streaming.

Tacc2: There are two reasons that people will continue to download music.

1. Bitrate. The quality of streamed music usually sucks. I'm sure it will improve over time, but it may be a while before it becomes really good.

Readers also reacted to how different age groups access their music. But in the comments on this story, people were quick to point out their age and how that factor didn't necessarily decide if they bought or streamed music.

Jake Eisenmann: I'm a young music listener and I absolutely hate streaming music. The ads are annoying and the quality sucks. Buying a CD or a vinyl record is the best way to go if you want quality and to be able to listen to the music without having to worry about whether your Internet connection sucks or not.

Other commenters praised vinyl records or CDs, dismissing other technology in the face of how they experience music.

Gibson5150: I still buy cd's! I dont own a ipod & never will. There is something more to own the album & hold it in your hands. To read all the liner notes & see the artwork in detail & to support the artist you like & listen too. sure i listen to some of the previews of new music that are streaming but when i like what i hear i go buy the cd. I also enjoy walking around a real record store not best buy & look through many cd's & find things i never seen or rare or imported cd's as well. If it's some kind of music i can't buy on cd & i can get it on vinyl album i'll get that too. Oh yeah people they still make record & turntables too.

This was a popular debate in the comments, and other commenters, like tr010101 were quick to respond - although the debate didn't always entirely disagree.

tr01010101 - my apologies, i seem to have responded to you thinking you were the poster below who was being a bit obnoxious about the fact that he purchases cds. i would have wondered why, with your views on music, you wouldn't just download the music, but you've already explained about the liner notes/artwork and what not. however, there are much better ways to support an artist, if that's really what you're trying to do. you can download the cd for free, buy a shirt from their merch store, and still be giving the band more money than you would have by buying one of their label produced cds.

Some identified streaming, or listening to the radio, with control, and suggested that their choice of music is akin to freedom.

Michael Gibson: I want to buy cd's.  I want to own my own music.  That is freedom.  I put the cd on my ipod and there it is.  It's not that hard or time consuming.  I agree that there needs to be ways to find new artists, because radio is not the way to do that.  But there is no way I want to download music and then the computer crashes and I can't get in to retrieve it or remember the 100 places I got my music from.  But, if I buy the music, it's sitting on the shelf.  Right where I want it and right where I can go to look at it and read through the booklets in the cd's.  Music isn't some invisible thing that floats through an internet connection.  It's a live experience that you should pay for and support.  I am afraid that too many kids believe that everything should be free.  I know there are some people who just listen to music and don't have a connection to it.  That's fine.  I am just urging everyone to keep buying music.  Please keep buying cd's.  They are the last physical tool we have to control our own music without letting someone do it for us.

"Corporate greed" was also commonly referenced in the comments, implying or blaming the recording industry for undesirable changes that upset music fans. But this comment addresses another popular conversation: Will streaming your favorite music always be available?

Dreamer96:  Hmm The Beatles put all the ownership rights to their songs under the company "Northern Songs", a company setup by their manager, Brian Epstein...That was in 1963..The company went public in 1965...Band members, John Lennon, and Paul McCartney, each owned 15% of the shares,..but Dick James, and Charles Silver, together own 37.5% and had control of the company, ..and in 1969 James and Silver negotiated a deal with ATV, Associated Television Corporation, and sold the company...and the Beatles did not own their own songs anymore..I think that was the end of the band....The Beatles broke up in September of 1969..

The most popular Rock Band of its time, had its heart broken, by outsiders, by Corporate Greed....

So I guess owning your songs sometimes is all that matters....What would you do if tomorrow the songs you loved to stream were not available anymore..

In reply, one user suggested that not all music is available for streaming, which is why some may prefer to download what they choose.

Megaphone: Well, all bands break up. The timing doesn't necessarily mean a  cause and effect. And at least two of them went on to huge solo careers. But it's true about availability. The reason I don't stream a lot of my music is because a lot of it is older or a little obscure, so it isn't always available for streaming. Or if it is, I don't know how long it will be.

Perhaps one of the most intriguing conversations to begin in the comments for this story involved the music itself. People debated whether or not today's music had the same quality of other generations, and if the ways we access music have anything to do with it. Marshall Lilly added a new perspective to the conversation.

Marshall Lilly: I find it amusing that the starting point for a lot of people commenting here is the assumption or statement that others are downloading or streaming songs as opposed to buying albums because artists are only concerned about writing a few good singles for each album and that's it.  If you're only listening to artists who only write one or two good songs every couple of years, you're listening to bad music.  When I think back to just the last year and a half, there's a list of great full records that goes on and on.  Beach House, Antlers, Atlas Sound, Tom Waits, Destroyer, Sigur Ros, Earth, Lambchop, etc.  Don't tell me that artists aren't putting out good records anymore.  Maybe the ones you're listening to don't....

In reply, user SamComesFrom addressed that "radio-friendly" songs may not always be ear-friendly.

SamComesFrom:  I think a large part of that assumption is that people believe that the singles the radios play non-stop are the only good songs on an album.  Oftentimes, the radio friendly singles are some of the worst songs on any given album.  People just mistake recognizability for quality.