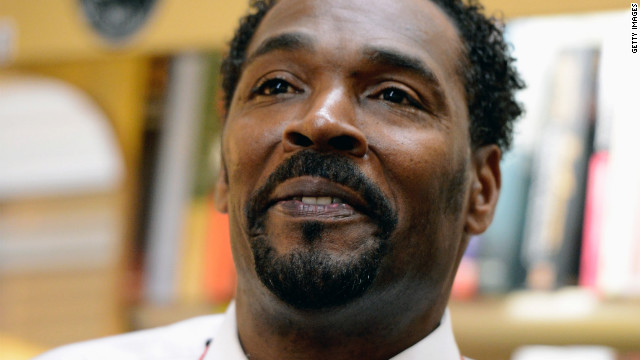 Overheard on CNN.com: Rodney King 'had demons. But called them his own'

Two decades ago, Rodney King became a divisive figure in American culture. His beating at the hands of Los Angeles Police brought our country’s racial debate to a boil and, for a time, brought the city of Los Angeles to its knees.

King, 47, was found dead today in his swimming pool. His passing has reignited debate on his legacy, the meaning of justice and the state of race of in America.

Here are some examples of what CNN.com readers and CNN iReporters had to say:

thespiritguy: Rodney King wasn't really a hero or villain. Although he was an alcoholic who made a lot of mistakes and certainly deserved legal punishment, I can admire and respect his decision to talk about getting along, at a time when he could have screamed, 'burn down the city.' That act redeemed him, in my book, and he did deserve a settlement. At least it was a reminder to those who are sworn to uphold the law that they can't take prosecution into their own hands, which is healthy.

Brad Simmons:  I'm very familiar with the case. Yes, he did rush the police and perhaps he needed to be restrained but there is what needs to be done to restrain a person and then what these people did. I saw the tape and it was excessive force, plain and simple and if you can't/don't see it, then that's your problem not mine.

Also, the jury doesn't ALWAYS get something right. OJ Simpson got acquitted for killing his wife and Goldman and he was guilty. The system isn't fail proof you know! I know, that must come as a shock to you.

apple597 Thank you, Brad. There was no reason why 2 officers could not have subdued him while the other 2 put his hands in cuffs and held his feet together. The beating was excessive and this video has been shown many times, so whatever happened before is pretty irrelevant. We don't pay taxes so that the police can beat whoever they feel like, so that my tax dollars additionally go to treating these people in the hospital ... their job is to subdue these criminals and take them away. The fact that the guy had to be taken to the hospital and have surgery for his injuries is enough evidence for me.

okatj: Rodney King is a symbol. He's not a hero, and I don't think anyone (including himself) in this country really believes that he was a hero. Those who were watching the television that day (not from their mother's womb where I think a lot of you pinheads were at the time), used to think racial profiling was an urban legend. I know I did until I saw what happened to him - and NO - not a single person on this earth deserves to be beaten nearly to death. Death is reserved for punishment befitting the crime that has occurred and has been proven in a court of law. (I say with some trepidations considering the number of condemned on death row that are being exonerated by DNA evidence.) That camera shot shed light on something that white America was really clueless about because it wasn't happening to them and nobody had shown America the truth.

I am stunned by the racism and ignorance in comments posted here. It's absolutely shameful how so many folks still believe the color of a person"s skin dictates who they are. How absolutely UNAMERICAN of any person in our country to really think in this manner. My grandfather, who I believe was a closeted Klansmen, would be proud of you! (PUTRID and DISGUSTING!!) Those who do think these things should read a little about our country's history.

Can’t we all get along?

Brational2:  He wasn't a saint. He had demons. But he knew their names and called them his own. He didn't blame anybody else for them. He endured things most of us never will have to. He forgave what many of us could not. And he asked one really important question, for which he will be remembered, and which still needs an answer: Can we all get along?