Mash-up: a tick, a dog, a duckling, a movement

Matt Kibbe, president and CEO of FreedomWorks, a national umbrella organization for the tea party movement, says his group is learning from liberals the art of community organizing:

Are you my mother?

Here's your cute animal video of the day.

When ticks eat, you spurn meat

It seems that after being bitten by the lone star tick, some people suddenly become strongly allergic to red meat, CNN affiliate WJLA reports. "My life would be over if I couldn't eat red meat," Alexandria, Virginia, resident David Kudlow told WJLA. "If I couldn't have steak, I probably wouldn't want to live much longer." University of Virginia researchers discovered the tick connection; about 1,000 cases have been reported in the state.

A voter registration document arrived at Tim Morris' house last week, but it wasn't addressed to him, CNN affiliate WSLS reports. Instead, it was addressed to a former resident of the house named Mozart. Two problems there: Mozart had been dead for two years, and Mozart was a dog. "I opened it up and looked at it and I just laughed," Morris told WSLS, which has more on the story.

CNN guest columnist Amanda Enayati turns conventional wisdom on its raven-haired head and offers the proposition that the older brain may be more capable than its younger counterpart at creativity and innovation. That idea sparked an interesting conversation among readers, including this comment: 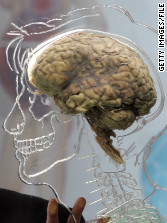 My husband never grew up and was a very active man. I believe one of the secrets to living a full life like he did is too keep trying new things and never falling for being locked into the role of the 'wise ol' man' (or woman) who can sit back and dispense his/her wisdom rather than actively pursue it. Instead he was the slightly goofy ol' man that every now and then made a connection from the past work with something in the now. It's that kind of creativity that younger generations are still building connections for, that older generations already have. It was wonderful being around him and I often think that kind of wisdom is overlooked. I do not plan on growing into a fountain of wisdom, but hopefully that funky ol' lady that sometimes comes up with some connection that turns knowledge from the past into something useful today.

Wait, it's almost over

Don't have the patience to sit through a whole parade? CNN iReporter Kim Sidwell has just the thing for you: A time-lapse video that boils the thing down to 3 minutes, 45 seconds. You've spent more time than that waiting for a Sno-Cone.

On the horizon: Summer begins; Romney boys on Conan

On Wednesday, the summer solstice will occur at 11:09 p.m. Universal Time, or 7:09 p.m. Eastern Time in the United States.Â  This marks the northernmost track of the sun and the day with the longest period of daylight in the Northern Hemisphere. Where are you going this summer?