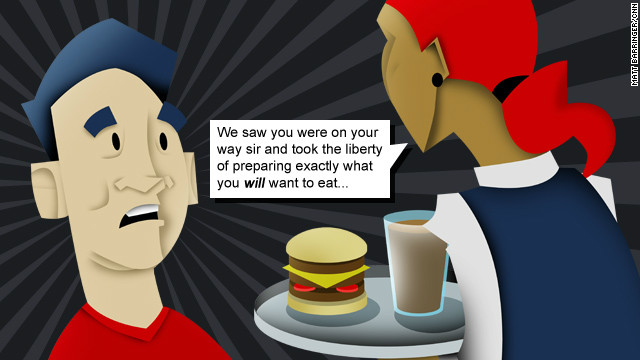 Overheard on CNN.com: 'Too lazy to place our own orders? Please.'

swohio: "And everyone used to think technology would make our lives so much better."

seyedibar: "And everyone was right."

CNN spoke with Loic Le Meur, founder of the European Internet conference known as LeWeb, about tech companies devising "faster than real time" experiences that anticipate your needs. Such topics will be the theme of LeWeb London this year. For example, a computer might be able to select food for you before you know what you want to order. Such projects are controversial; critics say they put people's privacy at risk. Readers responded with lots of hypothetical scenarios, with many wondering how this technology could and should be applied.

Should we fear mind-reading future tech?

Some smelled a hint of dystopia.

Kynt: "We're being lulled into lazy, ignorant obedience and compliance by the promise of ultimate comfort. We readily sell our privacy and leave our brain and conscience at the door for yet more instant gratification. All those who believe they will be in control delude themselves, because the true cost for the comfort and instant gratification are the very tools that would give you control."

Are we getting lazy?

WickedTribe: "Sounds like a huge waste of time and money. I know we as a society are becoming as lazy as possible, but too lazy to place our own orders? Please."

thecabin: "We’ve been slowly losing our freedom. This could be the device that speeds the process up. I think there’re already a lot of people who have been 'brainwashed' to a certain degree. This is how government and corporations get more 'control' over the population. Who knows? Something like this could start a war."

How much is that doggie in the window?

thinkb4act: "Facebook and Google already do this with targeted ads, supermarkets are using smart carts and hidden cameras that detect eye movement for marketing purposes. We live in a world that only cares about selling you something. The more they can sell the better it is."

In this case, maybe life imitates sci-fi. Would you let a computer assist your decisions?

thinkb4act: "See '1984,' 'Minority Report' and so forth ... reality tends to copy sci-fi. I can easily see where the OP is going with this. People will get even more lazy than now and relent to a machine making decisions for them. When forced with many choices most humans make the 'safe' choice otherwise known as the 'familiar' choice. The brain can only handle so many decisions. Today's menus are loaded with so many choices people become overwhelmed. Now you have machines that know you like a particular dish or item so now they have it ready to go, heck they could even guilt you into buying something you never wanted in the first place. How many people remember phone numbers anymore, appointments ... don't need to, right? It's all on your iPhone or Android phone. Until it dies and you lose all your data, then what ? You'll lose most of your friends, as you'll have to wait for them to contact you since you never remembered their number.

mcguffin8: "It works just like American presidential candidates except we get exactly what we don't want. ..."

Make a right, then a left.

silverfaery3: "Wow, one more thing to make people think less ... well my phone told me I would like it ... so I'll do it. Navigation systems are annoying. No different then using MapQuest. When I go on a trip, I typically jump the first five steps or so. Why? I already KNOW how to get to all the highways and interstates in my area and they ALWAYS tend to take me to the exists opposite of where I am living. In my town there are at least three exists to get to within town, but they will direct you to the one right off the interstate where all the travelers and restaurants are. I'll pass, thank you."

Rise of the machines!?

bigfrog6: "If this were an article about immigration there would be lots of posts about loss of jobs. But since this is a tech article there are no such concerns, yet tech is the biggest job killer in history.

Tuco786: "The loss of jobs is not the greatest problem. The loss of liberty is, as this technology will eventually allow the politicians to control what we think. Of course, the politicians will claim they just prevent harmful thoughts."

But maybe we're already there.

flyboy60: "It's a shame that our bleeding edge technology is used for ... advertising. Really? Aren't there more noble things that we can do with high-end computing?"

Take that. And that.

Nick Marsden: "So, what if the server brings me my 'usual' drink and I decide I want to change my mind? This is stupid. A computer telling me what I want just because I've wanted it before? I've had that happen on the Internet already and almost EVERY TIME, it's not what I wanted in that moment."

narutogrey: "That's the thing. It'll learn. If you keep changing your mind regarding your drinks, it'll learn that behavior. It'll take into account all your surroundings such as location, day, time, weather, stock market status, etc. ... to figure out that under certain situations, you really would like to change your mind on drinks. Everyone follows a pattern even if they purposely try to not follow a pattern or do disruptive 'random' behavior. In the end, that randomness has a pattern once you collect enough data."

Jazger: "Plus, add in facial recognition, and expression interpretation, the machines will know if you're unhappy, in a bad mood, etc., and that will all be fed into its profile of you. So it will know when you're most likely to try to 'stump it' and alter its recommendations accordingly. I mean they already have systems that can tell if you're lying, based off a few test questions and eye movements/blinks. So it will even know when you're 'trying to pull a fast one.' "

narutogrey: "What Jazger said is correct. There is already a very accurate lie detection method based just on a camera that'll detect your facial expressions and body temperature (via IR) and determine if you are lying. It's not as accurate as a full lie detector test, but it is getting better and better every year. It can detect when people are purposely manipulating their facial expression to try to trick the camera."

narutogrey: "Extreme contrarians are one of the easiest to predict patterns."

This commenter plans to deliberately game such a system.

Bozobub: "I would take an inordinate amount of satisfaction in turning down products that companies *assume* I'll want. Nothing could please me more than eating holes in their wallets as punishment for their presumption ^^ ... What if I want a SODA, not a beer, or a DIFFERENT beer? What if I wanted to camp, instead of stay in a hotel..? LOL – Sorry, corporations, I'm not very good at doing what YOU want me to do. C'est la vie."

narutogrey: "A good algorithm would have predicted that you'd want to go to camp and have a soda. They would take into account your past behavior of turning down the initially offered product by giving you a beer mug and telling you it's beer and then when you say you want soda, it'll tell you that they actually already filled it up with soda."

Will you have your usual?

sarahH: "This is what happens to me at Starbucks."

Take it a step further.

thecabin: "If the 'true' mind-reading (ESP, telepathy, etc.) worked, what would that do to the world? It’s an exciting thought to think that you could read someone’s mind. But maybe it wouldn’t be so exciting once we started to learn, very quickly, what the implications were. My God! It could be mass chaos. It could be a total nightmare."

There are other problems.

fistv: "It seems a shame that all these brilliant people are working on this kind of thing when real problems need to be solved. Problems like throttling governments back, increasing freedoms and not providing those same governments with more tools to use to monitor and control people. Practical replacement of transportation engines and fuels for everything from motorcycles to jet aircraft and not using food products for manufacturing fuels."

Will we play it too safe?

shippuuden: "This will also play off of our inability to make up our mind and accept what is presented. There may be three drinks that I may pick from. My choice comes from what my thoughts are at the time that it is selected. Yes there are some things that would lead me to one over the other that happened earlier but it is still a random sample. Now if the computer removes my decision knowing that I want one of the three and it is there when I am my mind will accept the choice even if I would have selected another option. What this would do is prevent people from trying new things, which is why it will not work. It won't allow for risk taking."

Maybe it would have come in handy for a young businessman whose last name rhymes with Tuckerberg.

Jck0816: "Guess Facebook should have used this technology to predict their stock price."