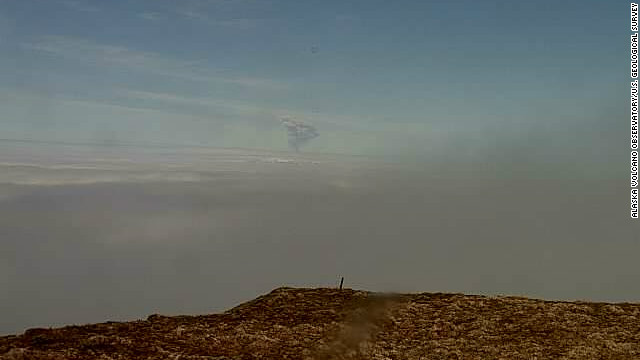 An ash cloud rises above Alaska's Cleveland Volcano on Tuesday. The image was taken 45 miles from the volcano.
June 20th, 2012
08:18 PM ET

Scientists have raised an aviation alert level around a remote Alaskan volcano after a small eruption produced an ash cloud several miles high.

The observatory on Tuesday raised its color-coded alert for aviators to orange, the second most serious of four levels, and warned on its website that "additional sudden explosions of blocks and ash are possible with little or no warning."

No activity was detected Wednesday, but the alert remained at orange, the observatory said.

The volcano makes up the western half of uninhabited ChuginadakĀ Island, part of the Aleutian Island chain in the Bering Sea. It is about 45 miles west of Nikolski and 940 miles southwest of Anchorage.

The alert level has bounced between orange and the lower step, yellow, several times in the past year. The observatory last issued an orange alert in late March, when satellite images showed a lava dome had formed in the summit crater.

The volcano's most recent significant eruption happened in February 2001, with three explosions that led to ash clouds as high as 7.5 miles above sea level, according to the observatory. The volcano's elevation is 5,676 feet.

The GrimsvotnĀ eruption came about 13 months after Iceland's Eyjafjallajokull Volcano put ash and smoke into the sky, forcing the cancellation of thousands of flights per day during the peak of the problem.

- CNN's Jason Hanna and Darrell Calhoun contributed to this report.

US President Biden dispatched an unofficial delegation to Taiwan Tuesday in a show of support for the island, accorātwitter.com/i/web/status/1ā¦j6
cnni

8:57 pm ET April 13, 2021 RETWEET
"Humans share with other species the potential to signal danger when screaming, but it seems like only humans screaātwitter.com/i/web/status/1ā¦C3
cnni

8:37 pm ET April 13, 2021 RETWEET
Now to be clear the judge said it was too prejudicial for the jury to hear her testimony about Chauvin.
sarasidnerCNN