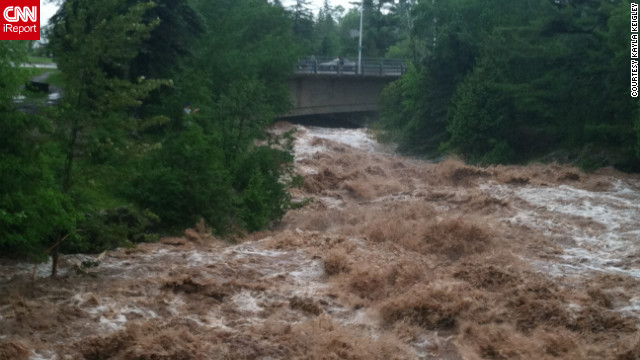 Flash flooding in Duluth, Minnesota, has forced residents to evacuate, left homes underwater, destroyed roads and even led to the drownings of at least eight animals at a zoo.

Between 5 and 9 inches of rain fell between Tuesday night and Wednesday morning, sending what looked like raging rivers through Duluth's streets, according to the National Weather Service. Another 2 or 3 inches of rain was still likely to fall.

Duluth residents, who are more used to having snow dumped on them rather than flash floods, said the damage was worse than anything they had ever seen.

"This flooding has been crazy. We have not experienced anything like this in our community," iReporter Kayla Keigley, who said she works as a health care preparedness coordinator, told CNN. "Roads are destroyed. Neighborhoods are underwater. I am in shock and I work in the field of preparedness - this is something I work to 'deal with' daily. Our community is in disbelief."

Workers at the Lake Superior Zoo were in disbelief, too, when they learned at least eight animals drowned there. The toll might still rise, because the workers hadn't yet been able to check all enclosures.

"Sadly the zoo experienced the loss of several animals, among them many of the barnyard residents," Susan Wolniakowski, the zoo's director of guest services, said in a news release. "Due to flooding, the zoo’s polar bear Berlin was able to exit her exhibit. She was darted by the zoo’s vet and is safe in quarantine. At no time did any dangerous animal leave the perimeter fence."

The zoo said the staff still was assessing the situation.

With more rain still coming down this afternoon, the mayor, the weather service and local emergency management officials warned residents to be careful and to stay off the roads. Several people have had to be rescued from their cars because of either flooding or because they had fallen into sinkholes, the weather service reported. 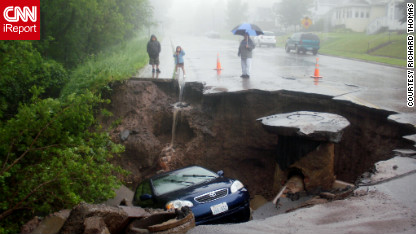 Richard Thomas sent iReport a photo of this car that drove into a sinkhole when it was flooded.

"We continue to emphasize that this is an extremely dangerous and life threatening situation for all areas in Duluth and along the north shore of Lake Superior," the National Weather Service said.

Keigley told CNN that in the area of Duluth where she lives, the "water has destroyed city streets, manhole covers are blown, (and) storm water is overflowing into the streets."

"Debris is washing down the roads, cars are underwater in some places, (and there are) sinkholes in neighborhoods," she said.

Keigley said that nearby rivers were overflowing and surging through the neighborhood.

"This is absolutely crazy and insane," Keigley said. "This is nothing like normal Duluth weather."

- CNN's Kara Devlin and Dave Hennen contributed to this report.