The Georgia student who shared a photo of a crowded hallway at her high school says she has received threats. The sātwitter.com/i/web/status/1ā¦Nw 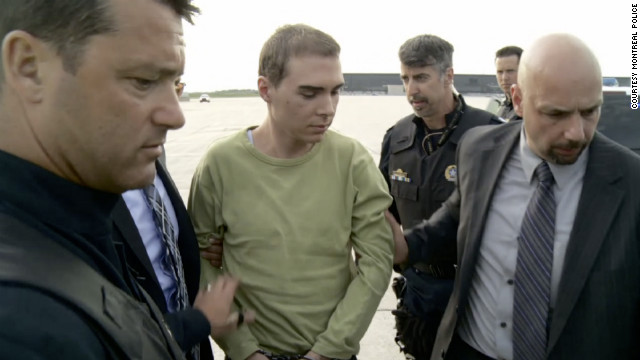 Luka Rocco Magnotta, faces first-degree murder and other charges in the death and dismemberment of Jun Lin, a 33-year-old Concordia University student from China.

At a hearing Tuesday, Magnotta, 29, pleaded not guilty to all the charges.

Magnotta appeared Tuesday via video link for security reasons and is expected to do so again Thursday, said prosecution spokesman Jean Pascal Boucher.

Authorities accuse Magnotta of dismembering Lin and mailing his hand and foot to Canadian politicians.

Police also believe Magnotta filmed the death and dismemberment and posted the video to the Internet. They have said the video shows Magnotta engaged in sexual acts involving body parts and also includes evidence of cannibalism.

11:26 am ET August 9, 2020 RETWEET
RT @maggieNYT: A reporter asks POTUS why he keeps making false statement that he passed Veterans' Choice. He ends the presser, to applauseā¦
susancandiotti

11:17 am ET August 9, 2020 RETWEET
#OnTheTrail is now streaming on @hbomax featuring a behind the scenes look at the women of @CNN and their dogged woātwitter.com/i/web/status/1ā¦Cf
susancandiotti