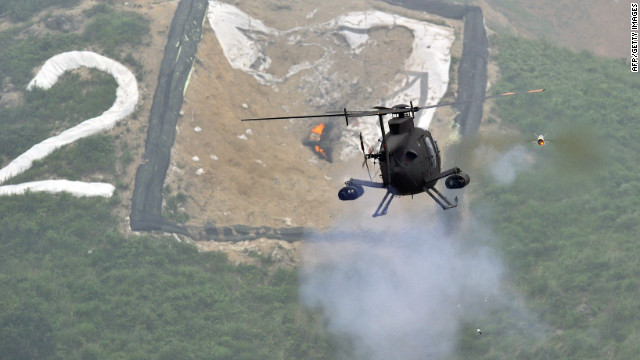 A South Korean helicopter attacks an "enemy" target during a live-fire exercise Friday south of the Demilitarized Zone.
June 22nd, 2012
10:12 AM ET

U.S. and South Korean forces on Friday conducted what they called their largest live-fire military exercise since the end of the Korean War, according to reports from South Korea.

More than 2,000 troops plus fighter jets, helicopters and armor from both nations participated in the hourlong exercise, conducted as about 4,000 spectators looked on, according to a report from Stars and Stripes.

The exercise took place in Pocheon, about 20 miles (32 kilometers) southeast of the Demilitarized Zone that marks the border between North and South Korea.

"We train together to ensure we are ready to stand shoulder-to-shoulder with our (South Korean) army partners if called upon,” said Lt. Col. Joe Scrocca, a spokesman for the U.S. Army's 2nd Infantry Division. “We are a more lethal force together than we would ever be separate.”

Meanwhile, the U.S. aircraft carrier George Washington was to lead a large naval drill off South Korea beginning Saturday, according to a report from the Yonhap News Agency. About 8,000 military personnel, along with about 10 ships and submarines, were to participate.

He warned North Korea not to react in a hostile manner.

"We will immediately retaliate against any provocations from North Korea," Yonhap quoted the general as saying.

The North reacted angrily after naval drills this week between U.S., South Korean and Japanese forces.

"The dangerous moves to knock into shape the triangular military nexus is an act going against the trend of the times for regional peace and stability, including on the Korean Peninsula," read a piece in the ruling party newspaper Rodong Sinmun, according to Yonhap.

"Dark clouds of a new war are thus hanging heavily in Northeast Asia, including the peninsula," the newspaper said, according to Yonhap.

"Even the slightest provocation on the peninsula may promptly lead to an all-out nuclear war between both sides and a regional war because it is the region where the world's biggest military forces including nukes are concentrated and there is neither lasting mechanism nor guarantee for averting a war," the North Korean agency said.

Tension in the Korean peninsula has escalated since North Korea's shelling of a South Korean island in 2010, which killed four, and sinking of a South Korea warship that killed 46 sailors in a torpedo attack blamed on the North. The North has denied it was behind the attack.