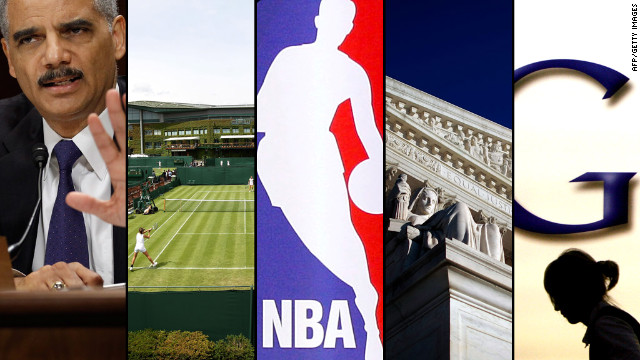 The high court is expected to rule this week on Arizona's controversial legislation on immigration and possibly on the federal health-care reform law that is the signature legislation of President Barack Obama's term in office.

The Arizona ruling could have widespread implications for other states with similar laws. At issue is whether states have any authority to step in to regulate immigration matters or whether that is the exclusive role of the federal government. In dry legal terms, this constitutional issue is known as pre-emption.

Several other states followed Arizona's lead by passing laws meant to deter illegal immigrants. Similar laws are under challenge in lower courts in Georgia, Alabama, Utah, Indiana and South Carolina. Arizona's appeal is the first to reach the Supreme Court.

The four provisions of the Arizona law that are on hold pending the decision are:

- A requirement that local police officers check a person's immigration status while enforcing other laws if "reasonable suspicion" exists that the person is in the United States illegally.

- A provision authorizing police to arrest immigrants without warrant where "probable cause" exists that they committed any public offense making them removable from the country.

- A section making it a state crime for "unauthorized immigrants" to fail to carry registration papers and other government identification.

- A ban forbidding those not authorized for employment in the United States to apply, solicit or perform work. That would include immigrants standing in a parking lot who "gesture or nod" their willingness to be employed.

The justices are also weighing the constitutionality of the Patient Protection and Affordable Care Act, the health-insurance law Democrats had dreamed of for generations until a compromise version finally signed into law  in 2010.

The  key issues in that case:

– Does the law overstep federal authority, particularly with the "individual mandate" that requires nearly everyone to obtain health insurance or pay a penalty?

– Must the entire act be scrapped if that key provision is unconstitutional?

– Are the lawsuits brought by the states and other petitioners barred under the Anti-Injunction Act and must they wait until the law goes into effect?

– Are states being "coerced" by the federal government to expand their share of Medicaid costs and administration, with the risk of losing that funding if they refuse?

The rulings could come on Monday or Thursday.

It's dubbed the "Rain of Poems" and organizers vow it will be "one of the most visually stunning displays of aeronautical poetry ever seen."

At sunset on Tuesday, 100,000 poems from more than 300 artists in 203 countries will be dropped on bookmarks over London's Jubilee Gardens as part of the Poetry Parnassus, a festival being in conducted as part of the buildup to the Summer Olympic Games.

The poetry drop was supposed to feature the works of artists of all 204 countries participating in the London Games, but organizers say they've fallen one nation short, according to a report from the BBC.

Despite pleas, organizers say they've had no response from any poets in the French Riviera principality of Monaco, the BBC reports.

"It's not through a lack of effort on our part. We could not have been more open in our invitation," festival curator Simon Armitage is quoted as saying.

The U.S. House could, for the first time in history, vote this week to cite a sitting U.S. attorney general for contempt of Congress.

A House panel that is investigating the Bureau of Alcohol, Tobacco and Firearms' controversial Fast and Furious gun-running sting recommended the vote against Attorney General Eric Holder last week. House Republicans, who control the panel and the chamber, say he has not provided all the documents the panel needs for the probe.

President Barack Obama asserted executive privilege over some of the documents on Wednesday, meaning Holder could withhold specified materials. But the House Oversight Committee voted the same day to recommend a contempt citation to the full House, setting up a possible vote on whether to cite Holder for contempt this week.

If the House cites Holder for contempt, he could be prosecuted on a criminal charge of contempt, which carries a penalty of $1,000 and up to one year in prison. But Alan Morrison, associate dean of the George Washington University Law School, says it's more likely that the House would pursue civil prosecution in federal court to gain the information the House seeks.

The 2012 Championships at the All England Lawn and Tennis Club begin Monday with the top three players in men's tennis in position to take or hold the top spot in the rankings, according to SI.com's Courtney Nguyen.

Current No. 1 Novak Djokovic retains the top spot if he makes it to the final; Roger Federer retakes No. 1 if he wins the title and Djokovic doesn't make it to the final; and Rafael Nadal becomes No. 1 by winning Wimbledon and having Djokovic fail to make a semifinal.

Play goes on through July 8.

See how the men's draw breaks down

What to look for on the women's side

"Learn the tech world's latest web, mobile and social breakthroughs and meet the developers who are turning them into tomorrow's startups," touts the website for the event.

The conference's sessions will be available via a live stream and there will be local viewing events hosted by Google offices around the country.

The National Basketball Association's 32 teams get their pick of the best college and foreign talent in the 2012 draft on Thursday.

There seems to be no doubt the New Orleans Hornets will take Kentucky forward Anthony Davis with the No. 1 pick, but there's intrigue after that, writes SI.com's Sam Amick.

The Charlotte Bobcats, who had the league's worst record and an NBA all-time low winning percentage last season, hold the No. 2 pick, but may not keep it, Amick writes.

The Cleveland Cavaliers, holders of the Nos. 4, 24, 33 and 34 picks, may be willing to trade some or all of those picks to get Florida shooting guard Bradley Beal, according to Amick.